Chimpanzees Learn to Use Tools On Their Own, No Teaching Required 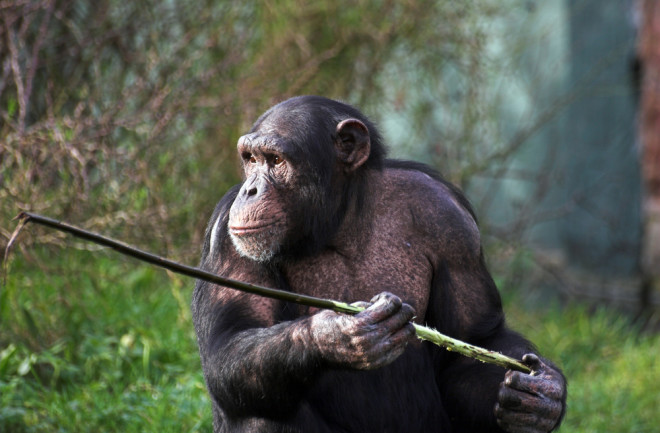 (Credit: By Norma Cornes/Shutterstock) As it turns out, chimpanzees don’t need to see in order to do, no matter what the old mantra might lead you to believe. A common belief among researchers is that chimps need to watch other members of their communities use tools before they can pick the behavior up. In a study published in PeerJ in September, researchers from the University of Birmingham, and the University of Tübingen challenged this belief and checked to see if it would hold for a specific kind of tool use.

When A Stick Isn't A Stick

They attempted to recreate a behavior commonly found in the wild: the use of sticks to scoop algae from the water to eat. Would chimpanzees that were unfamiliar with this behavior be able to figure it out on their own? To test this, the researchers studied the chimps at Twycross Zoo in the UK. These chimps, isolated from wild communities, had never watched their elder’s use sticks for scooping before. The researchers provided the chimps with a container of water containing floating pieces of food, as well as sticks to use, but gave no other instructions. Nevertheless, they watched the chimps successfully use sticks to remove the food — and more importantly, they used the same type of scooping motion their wild relatives use.

This means that not all tool use is learned on a social basis, invalidating the “monkey see, monkey do” hypothesis of tool use. Instead, chimps can learn for themselves. Social learning does still play a role in the transfer of skills, though. Once one chimp takes up a skill, the others in the group will learn through observation, meaning every chimp won’t have to figure out how to scoop algae for themselves. The study extends these findings to an assessment of chimpanzee culture, saying that this individual learning is the basis for all cultures — even human. The ways in which these chimpanzees learn individually, then communicate that information socially, also happened in early human societies. Cultural transmission isn’t the only method of learning, though. Genetics and ecological factors also play a role in the establishment of behavior. But hey, the fact that chimps are establishing a cultural basis by learning and transmitting knowledge is pretty cool. Listening to NPR and reading Dostoevsky may be far off, but we all have to start somewhere.