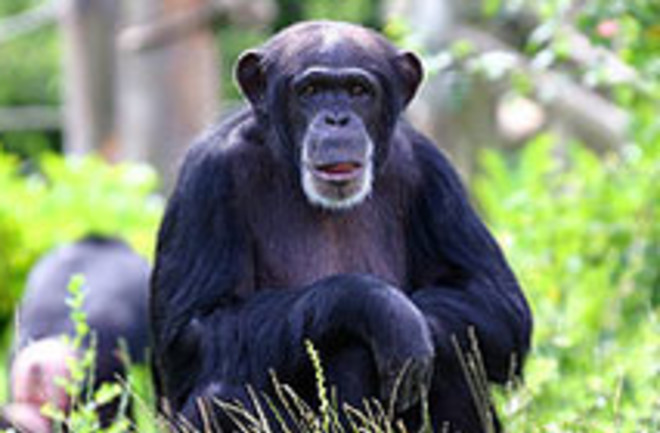 British psychologist Simon Townsend certainly picked an interesting line of work. Instead of getting bogged down in human neuroses, he chose to spend 10 months camping in the Budongo Forest of Uganda, monitoring the active sex lives of a group of chimpanzees and making audio recordings of their sexual encounters. Besides providing fodder for interesting cocktail party conversations, Townsend also made some interesting discoveries about when and why female chimps cry out during mating. He found that they stay silent when mating with a low-status male, but let out loud "copulation calls" when mating with a high-status fellow. However, they're also likely to stay silent if there's a high-status female nearby who might break up the tryst. The findings, published in the journal Public Library of Science ONE, come as something of a surprise. Previously, researchers thought that female chimps used the calls to advertise their availability and attract more mates.

Male chimps and baboons are prone to kill any infant they believe could not be theirs, so females try to blur paternity by mating with as many individuals as possible before each conception. A side benefit is that by arranging to have sperm from many potential fathers compete for her egg, the female creates conditions for the healthiest male to father her child [The New York Times].

But Townsend's team believes that the females are making much more complicated social decisions when they choose whether or not to cry out. If they were primarily trying to attract more partners, the females could be expected to call out when mating with low-status males; instead, they stayed silent during those couplings. But they made a racket when mating with high-status males, "possibly to secure future benefits from the socially important males"

[AFP]. The researchers also found no evidence that other males competed to mate with the female directly after she shouted out.

What's more, the females' cries aren't influenced by the presence of males in the area, but are instead governed by the other ladies.

[T]he team describe how copulating females changed tactics when large, high-ranking females were in the area, falling silent. "They have to balance the risks against the benefits. By being quiet during copulation, they ensure other females don't know they are mating with a good quality male, so they don't have other females coming along and attacking them and stopping them from mating" [The Guardian].

So what's the bottom line in this chimpanzee meat market?

“The female chimps we observed seemed to be much more concerned with having sex with as many different males as possible, without other females finding out about it, than causing male chimps to fight over them,” said Townsend [The Times].