Children share when they work together, chimps do not 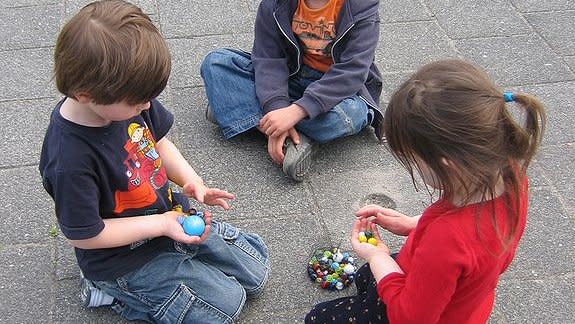 We are a cooperative ape, and a fair one. We work together to put food on the table and once it’s there, social rules compel us to share it around equitably. These two actions are tied to one another. In a new study, Katharina Hamann from the Max Planck Institute for Evolutionary Anthropology has shown that three-year-old children are more likely to fairly divide their spoils with other kids if they’ve worked together to get them. The same can’t be said of chimpanzees, one of our closest relatives. Sharing comes less naturally to them, and it doesn’t become any more likely if they’ve worked together to get a meal. Hamann says, “Among great apes, only humans are true collaborative foragers.” Other species might look for food together, but being next to one another is not the same as working together. The only exception are the hunting parties of chimps, where several individuals work together to kill monkeys for food. The slain monkeys are shared, but either under duress or in exchange for favours. With children, things are very different. Studies have shown that children as young as five to seven start sharing resources fairly among one another. On the other hand, when younger children come across a windfall of sweets, they tend to keep the majority for themselves. It’s tempting to think that children only develop a sharing ethic when they approach school age, but Hamann realised that something was missing. In all the previous studies, scientists had given children an unexpected hand-out. What would happen if the kids had to work together to get their own rewards – a more common situation, and one that better reflects our evolutionary past. Hamann ushered pairs of two- or three-year-old children towards a board with two small marbles at either end. By pulling on two ropes, the children could bring the board towards them, but as it slid across, one marble would roll over to the other side. Hamann found that the “lucky” child would often offer one of their three marbles to their partner – around half the time for the two-year-olds and around 70% of the time for the three-year-olds. And they were more likely to share if they had worked together than if the board was already within reach. 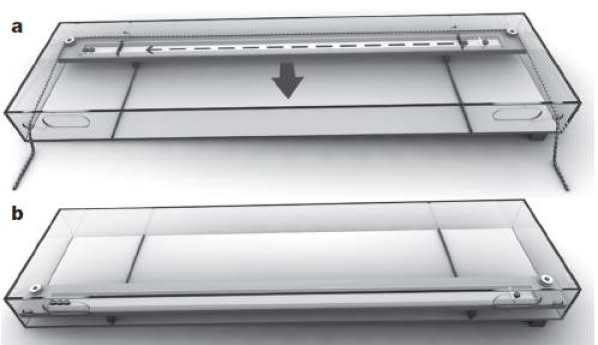 In a second study, Hamann refined the original experiment by bunching all the marbles together in a pile at the start. This ensured that the children didn’t automatically think that one set was theirs and one belonged to their partner. She also created a version of the board that had been split in half, so each child pulled on a separate one. The three-year-olds still shared more often when they worked together than when they worked in parallel, or not at all. The two-year-olds, however, behaved in a similar way across the three set-ups. The chimp version of the same experiment was a bit more complicated. Chimps rarely offer food to each other in the wild, so Hamann needed a way for them to do so without actively handing something over. She built a device that forced two chimps to pull a board using two ropes, in order to bring grapes within reach. As they did so, one of the grapes rolled to the other side, and fell down onto a see-saw on a lower level. Either chimp could then tilt the see-saw either towards itself, to claim the fallen grape. 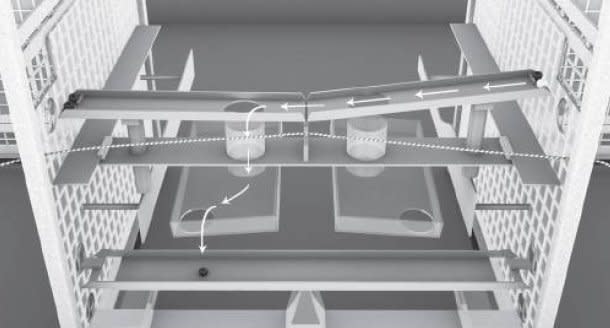 On two-thirds of the trials, the unlucky chimp “almost immediately” tipped the see-saw towards itself and took the fallen grape. On the rest of them, the lucky one claimed the grape. The lucky chimp never rolled the grape back towards its partner to equalise their shares. When Hamann stopped the unlucky chimp from tilting the see-saw, the lucky one almost always grabbed the grape. Even if the device was rigged so that the lucky chimp lost the grape if it tilted the see-saw towards itself, it only shared it on a sixth of the trials. Collaboration didn’t matter to the chimps. They were no more likely to share the grapes if they had worked together than if the food was already available from the start. “This is an elegant study,” says Ian Gilby, who studies cooperation among wild primates at Duke University. “I’m not at all surprised at the conclusion.” He notes that the results fit with the behaviour that scientists have observed in wild chimpanzees. “Hunting at most research sites is more accurately described as 'every chimpanzee for himself'. Meat is shared with persistent beggars, and in some cases, in return for other currencies such as grooming or coalitionary support. There is little evidence that meat is distributed according to a male's role in the hunt.” To Hamann, the key difference between the two species is that humans rely on one another to get their food, but chimps do not. When they forage, collaboration is the exception not the rule. As such, they haven’t evolved the tendency to distribute the spoils of teamwork. If they take a bigger share for themselves, other chimps might not work with them in the future, but that hardly matters if collaborative hunting is a niche activity. The value of sharing only became important when individuals needed to work together to feed themselves. John Mitani who studies primate behaviour at the University of Michigan, says, “I agree that there is something different about human sharing and sharing in other organisms, including our close relatives, chimpanzees.” But Mitani adds a word of caution, noting that Hamann tested the chimps and children with different resource. “Why not test the human kids with food that they are likely to value, say candy? This would be akin to the grapes that probably represent a treat to the chimpanzees. I’m old enough to have played with marbles as a kid, but I don’t remember being cognizant of their value when I was 2 or 3 years old.” This seems particularly strange given that the paper’s hypothesis is that our tendency to work together while looking for food could have led to our propensity for sharing.UPDATE: I asked Hamann about Mitani's point above, and she's responded.

"We had (and have) good reason to assume that children make no difference between food like candy on the one hand and non-food items like marbles on the other, since that was found very recently by Felix Warneken and others. In their experiments, they actually compared food and non-food items directly, but children shared no matter what: they did not differentiate between the two item types. Most importantly, however, is that the kids love the marbles and love playing with them. The marbles have been used in many studies, and children are invariably highly motivated to obtain them. After all, they were eager to keep them whenever they did not collaborate, but only shared after a collaboration."