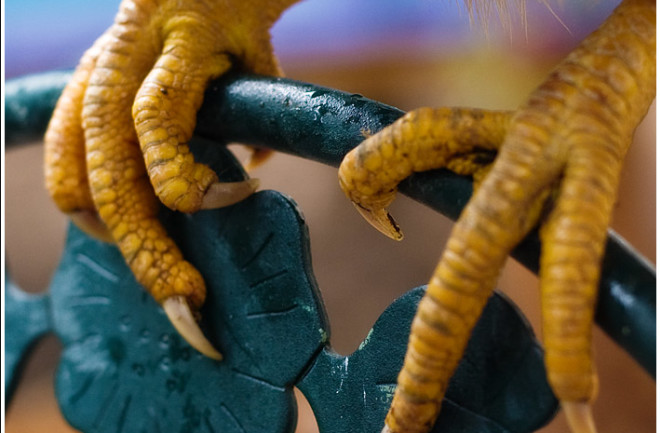 (Credit: ap./Flickr) It may not be Jurassic Park, but it's certainly a step in that direction. Scientists from the University of Chile have successfully created chicken embryos with a unique feature: dinosaur legs. Don't imagine chickens stomping around with giant Brontosaur legs, though — the changes are all internal. The feature in question is the fibula, one of two bones inside the leg. In normal birds, the fibula stops about halfway down the leg, connected at the top but not the bottom, leaving it just hanging in space.

When chicken embryos form, they have a full fibula, but as they grow, the fibula stops growing along with them. Instead, it separates from the ankle where it was first attached and grows thinner and more spindle-like. Dinosaurs, like humans, had full fibulas to help support their massive weight. It seems that, at some point in their evolution, birds stopped needing the extra bone. By modifying one gene, however, the researchers were able to undo the change. When they inhibited the expression of the Indian Hedgehog (IHH) gene, all the chicken embryos kept their fibulas throughout their development. They believe it has something to do with a bone in the ankle called the calcaneum, which normally connects to the fibula. When the IHH gene was suppressed, the calcaneum began to produce the parathyroid-related protein (PthrP) gene, responsible for promoting bone growth. With the gene modification, the chickens' fibulas kept growing throughout their development, as opposed to stopping halfway. The researchers discovered that, in normal birds, the cartilaginous growth plates at the end of their fibulas disappear shortly after they form, effectively halting bone growth. But with one small modification, millions of years of evolution can be undone. They published their work in the journal Evolution.

Genetic experiments of this kind have goals far more scientific than the creation of a theme park filled with once-extinct reptiles. By selectively altering specific genes in birds, researchers can essentially de-evolve them to see how they attained their current forms over millions of years. The same team of researchers succeeded in creating chickens with dinosaur-like feet last year, and a separate team in the U.S. led by famed paleontologist Jack Horner grew dinosaur beaks on chickens. All three experiments have a similar goal: to find the genetic roots of avian evolution. The chickens grown in the lab did not hatch, but matching a key feature of the evolution of birds from dinosaurs to a single gene highlights the fact that echoes of the dinosaurs remain in the DNA of birds today. Whether we choose to use that knowledge for good or evil remains up to us.