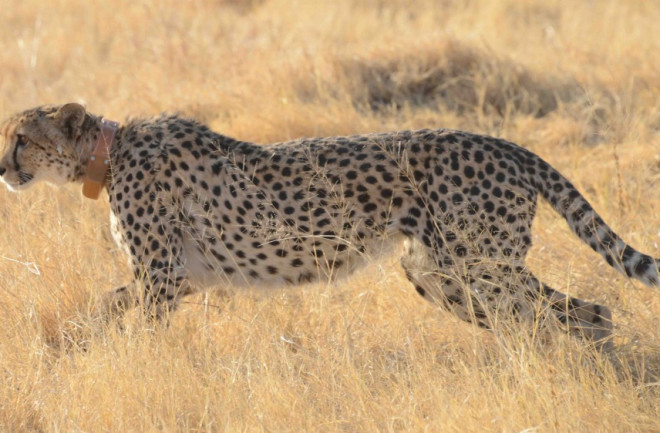 One of the cheetahs in the study wearing the monitoring collar. Credit: Structure & Motion Lab, RVC We knew the cheetah was the world’s fastest land animal — but now we know it can run circles around the competition. Using a new, high-tech collar that provides an unprecedented amount of data, a team studying wild cheetahs (Acinonyx jubatus) in Botswana found the big cats’ hunting successes were based on maneuverability and behavior rather than simply speed. According to their study, published today in Nature, the cheetah’s ability to accelerate and decelerate rapidly without losing its footing, and to turn tightly at moderate speeds, appears to be more important than being flat-out fast.

Previous studies have clocked cheetahs running as fast as 65 miles per hour. However, the authors of today’s paper note that some of the earlier studies were based on captive cheetahs chasing a straight-line lure and not indicative of how the animals actually hunt. Other research used direct or filmed observation of wild cheetahs hunting in open habitats such as savannah, during daylight, which limited analysis of their overall hunting patterns and abilities. The new study is the first to use a tracking collar that allows researchers to understand how a range of factors influence successful hunting outcomes for the animals. The collars collected data regardless of time of day or type of habitat, giving researchers a glimpse into cheetah hunting behavior at night and in dense vegetation. The run routes were also overlaid on Google Earth for more accurate terrain analysis. The collar, designed by the study’s authors, is similar in size and weight (about 12 ounces) to other collars used in wildlife study. Its features include GPS and an “inertial measurement unit” that includes accelerometers, gyroscopes and magnetometers, which can indicate posture and balance. A solar-powered battery and non-rechargeable back-up battery power the collar; data is downloaded by radio. The team put collars on five wild adult cheetahs in the Okavango Delta region of northern Botswana. The animals, three females and two males, are part of a population under continuous study by the Botswana Predator Conservation Trust. The collars collected data on a total of 367 verified hunting runs during a 17-month period. By physically observing a subset of runs, the team was able to identify successful hunting events in the data. The cheetahs’ movements exhibited certain patterns when they were able to catch prey, including greater rates of deceleration at the hunt’s end.

What makes a successful hunt

Hunting runs typically began with a period of rapid acceleration from either a stationary position or slow movement, probably indicative of stalking. Of the verified hunting runs, 26 percent were successful. Previously, it was assumed cheetahs predominantly hunted in open areas (using vegetation edges only to stalk) at dawn and twilight. But the study yielded some surprising results: Although almost half of the runs were at or shortly after dawn, hunting activity occurred throughout the day and night. Also, the animals hunted more than half of the time in dense vegetation or around shrubs and trees, upending the idea the big cats stuck to open ground when looking for a meal. The study recorded a top speed of 58 mph for the cheetahs, slower than other studies but still significantly faster than that of racing greyhounds (40 mph), horses (42 mph) or human sprinters (27 mph). The average run distance was about 567 feet, though the longest run recorded was more than a third of a mile. Top speeds for each animal were usually sustained for only a second or two during the run. Researchers noted that, at top speed, cheetahs did not attempt the tight turns characteristic of hunting runs. Instead, the animals decelerated rapidly before turning, adopting a low posture to reduce risk of pitching. This behavior reduced both the amount of space needed for a turn and the time it took to change direction. Based on their analysis of the data collected, the team concluded it is this superior maneuverability — resulting from both locomotion dynamics and behavior, not sheer speed — that is the defining factor for a successful hunt. Researchers say the data collection permitted by the new collars could yield valuable details for wildlife management agencies trying to prioritize the conservation of cheetah habitats.