Checking George Will: The Perils of Time Travel

While I was blogging over the past few weeks about fact-checking George Will's dismissal of global warming (collected here), I got comments. A lot of them. A fair number of commenters claimed George Will was right, and presented evidence that they claimed supported him. Some tried to back their claims with news that came out after Will's column was published. For example, a few days after his column came out, there were reports that the a satellite that measure ice cover had some trouble and was fixed. But George Will could not jump forward in time, check out the satellites, and then leap back to write his column. There's no way that it could have any bearing on fact-checking his piece. What's more, even if Will did know about them, he'd still be wrong, as I explained here. Today brought more time-travel. Trey writes:

Just FYI to the AGW crown [sic] and to support George Will and Lou Dobbs (CNN) there appears to be a shift to global cooling now. MSNBC and Discovery.com are reporting no warming since 2001 and that we’re looking at no warming or even cooling for the next several decades.http://dsc.discovery.com/news/2009/03/02/global-warming-pause-02.html http://www.msnbc.msn.com/id/29469287/

My response is much the same as my response to the satellite story. On February 15, George Will wrote the following about current "global cooling":

Besides, according to the U.N. World Meteorological Organization, there has been no recorded global warming for more than a decade.

If we're going to fact-check George Will, this is what we have to check. What does the World Meteorlogical Organization in fact have to say about global warming? This (from April 2008):

The long-term upward trend of global warming, mostly driven by greenhouse gas emissions, is continuing. Global temperatures in 2008 are expected to be above the long-term average. The decade from 1998 to 2007 has been the warmest on record, and the global average surface temperature has risen by 0.74C since the beginning of the 20th Century.

While important uncertainties still remain, the overwhelming global scientific consensus, as reflected through the IPCC Fourth Assessment Report, is now that the Earth’s atmosphere is warming at an increasing rate and that most of this warming is very probably due to human activities, particularly fossil fuel burning and certain agricultural practices. It is also recognized that, while these changes are just beginning, their impacts will intensify in the coming decades.

If George Will has been having back-room chats with the World Meteorological Organization folks, where they've repudiated statements like these, he hasn't share that news with the rest of us. My hunch is that Will would point to 1998, which was a very warm year, and say, "See, global warming stopped in 1998." But that's not how the World Meteorological Organization (or any major organization of climate scientists) judges global warming. It's pointless to pick out a single year for comparison, because the rising global temperature trend is overlaid on a naturally variable climate. If Will decided to pick 1997 or 1999, he'd have to deal with a year that was cooler than recent years. In fact, the World Meteorological Organization judges global warming based on averages of several years, which they compare to the entire climate record since humans started pumping carbon dioxide into the atmosphere on an industrial scale. So what about this new report from Discovery.com, and reprinted by MSNBC? First off, a fact-checker can't use it to confirm a statement Will made about the World Meteorological Organization three weeks ago. The story itself from Discovery is very short [strike]and doesn't provide any details about where the study in question came out[/strike]. So I got in touch with the scientists, Kyle Swanson and Anstasio Tsonis of the University of Wisconsin. They sent me their paper, called "Has the climate recently shifted?" It will be published soon in Geophysical Research Letters. 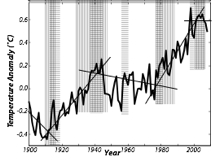 Swanson and Tsonis observe that over the past century, the average global temperature has risen, but there have been periods when it has dropped temporarily. Swanson and Tsonis have been investigating how the natural climate variability may explain the shifts between these phases. This variability includes oscillations in the circulation of the ocean and the air. El Nino is the most famous of these oscillations, but there are others as well in the North Pacific and the North Atlantic. Only three times in the twentieth century did all these oscillations synchronize, after which the climate moved to a new state. This figure, from the paper, shows the periods of synchronization as cross-hatched bars. Based on the study of chaotic systems, Swanson and Tsonis propose that the synchronization and climate shift are connected through cause and effect. Once a lot of oscillations are working in sync, even a small change to one of them can radiate out through the whole system and trigger a change. And along with the three shifts in the real climate, climate models also show a similar response when oscillations line up. In their paper, Swanson and Tsonis then look at the past few years. They see a peak in synchronization in 2001 and 2002, and they also observe that in the years since, the temperature change has been on average flat (although much warmer than at the beginning of the century). They estimate that all the warming due to carbon dioxide should have driven the temperature up .25 degrees C since then. The fact that it hasn't leads them to propose the the oceans and atmosphere have changed the way they handle heat. The oceans may have absorbed more heat due to a change in circulation, or the atmosphere may radiate more heat away by clouds. If this hypothesis is true, then it's possible that the climate will remain in this new stage for some years to come before it shifts again. Swanson and Tsonis write:

Of course, it is purely speculative to presume that the global mean temperature will remain near current levels for such an extended period of time. Moreover, we caution that the shifts described here are presumably superimposed upon a long term warming trend due to anthropogenic forcing.

They conclude with this warning:

This story has been bouncing around a lot around the blogosphere. The conservative Heritage Foundation quoted from the Discovery.com piece with the headline, "Trillions in New Taxes to Accomplish Nothing." A lot of the coverage describes the study as showing that global warming stopped in 2001, as Trey writes. But the paper doesn't say that. It says that a synchronization happened then. It's a bit odd how easily people can shift from claiming the warm year of 1998 as the end of global warming to 2001. So I asked Swanson and Tsonis what they thought about its reception. Tsonis wrote,

I was worried that this will happen, that is why we caution in the paper that while climate shifts may be part of the natural variability of the climate system they may be superimposed on a anthropogenic warming trend. We mentioned that also in the MSNBC story, and this will be my answer to anybody who asks me.

I like to report on the science only. If political organizations want to pick up what they like in order to pass their point and ignore the real science, there is nothing we can do.

Swanson wrote to me that this natural shifting is exactly what you'd expect if the Earth's climate was indeed sensitive enough to carbon dioxide that it would respond by warming as has been projected.

We are describing in this paper what is generally referred to as "internal" (natural) climate variability, superimposed upon a robust global warming trend at century time-scales. Viewed in that light, the "halt" in global warming is no different than an El Nino/La Nina transition, which also breaks a warming trend - what we are describing is just climate variability that occurs over longer time scales.

Swanson and Tsonis have certainly come up with an intriguing hypothesis, based both on temperature observations and mathematical models of the climate. I'll be curious to hear what other climate scientists think of it. It will take time to test, but even if it turns out to be right, it does not mean that global warming is over. If George Will could have climbed into a time travel machine and jumped forward to today, he would have been wrong if he tried to use this study to bolster his arguments back in February. Update: I just noticed the Discovery news article did mention the journal where the paper will be published. I've struck the offending text.