Check Out This Feathered Dinosaur Tail Preserved in Amber! 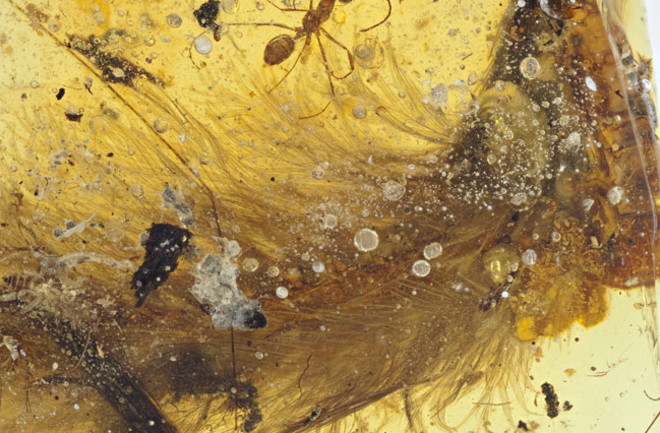 A stunning piece of amber, mined in Myanmar, preserves the partial tail of a feathered dinosaur, ants and a beetle from the middle of the Cretaceous Period, about 99 million years ago. Credit: Royal Saskatchewan Museum (RSM/R.C. McKellar). Pretty. So pretty. Pretty to look at and pretty significant: for the first time, researchers have got their hands on the tail of a non-avian feathered dinosaur preserved inside a piece of amber for almost 100 million years. Unlike dinosaur fossils found in sedimentary rock layers, this little beauty isn't squished flat, which allows paleontologists to study the tail as it was in life. Another bonus: the amber appears to have preserved components usually lost to the ages, including what may be residual iron from red blood cells. But before you shriek "Jurassic Park!" hang on...That's not even the coolest thing about this find. Described today in Current Biology, the partial feathered dinosaur tail is not alone in the amber: a couple of ants and a beetle were also preserved in the ancient tree resin. And while the insects add a little ambiance, come on, it's the tail that's transfixing. It's tiny, about an inch and a half long, and likely belonged to a juvenile member of the Coelurosauria lineage. Those are the more bird-like of the theropods (bipedal carnivores). Famous coelurosaurs include T. rex, Gallimimus and Velociraptor, the latter belonging to the maniraptors, which would eventually evolve into birds. But hang on, enough with the family tree. They found a feathered dinosaur tail preserved in 3-D. This is awesome stuff, people, but don't just take my word for it. Here's the super-sciencey way study co-author Scott Persons, paleontologist at the University of Alberta, describes the amber: "Per pound, this is the most incredible fossil I have ever seen. It is just packed with stuff!" Yeah, baby.

Researchers have found Cretaceous Period feathers in amber before, but earlier samples were tougher to identify as belonging to a dinosaur. Because this specimen preserves the tail, however, and that tail is flexible rather than the stiffened tail of modern birds and their nearest relatives, the team can definitively say the "D" word.

A micro-CT scan shows the dorsal view of the dinosaur tail found in 99 million-year-old amber. The partial specimen consists of eight vertebrae from a juvenile theropod, likely a coelurosaur. Credit: Lida Xing. Finding a bunch of stuff in amber is much better than finding the same stuff in rock layers because the amber preserves it in 3-D. That's particularly important when it comes to feathers, because paleontologists are still sorting out exactly how and when they evolved. And these particular feathers are unique. Again, take it from Persons, who knows his feathers and — warning — gets pretty excited about them (one reason I always love hearing from him).

"The shape of the feathers preserved in the amber is different from that seen in any specimen before," Persons explained in an email. "A complex feather (like on a modern bird) is made of fibers that branch off from one another. There is a big central branch (you can think of it like the trunk) called the rachis. Smaller fibers called barbs branch off from the rachis, and still smaller fibers called barbules (you can think of them as twigs) branch off from the barbs. Feathers from the amber specimen also have a rachis, barbs, and barbules. But, the barbules aren’t limited to the barbs. There are also barbules that branch off directly from the rachis, in between points where the barbs branch off. And that (if you will excuse my technical jargon) is REALLY weird."

A microscopic view of barbules on the dinosaur feathers described today in Current Biology. Unlike the feathers of modern birds, the tiny, blade-like barbules, the smallest fiber in feather structure, branch off asymmetrically at several points from larger fibers. Credit: Royal Saskatchewan Museum (RSM/R.C. McKellar). Okay, so it's whacky, but what does it mean for our broader understanding of feather evolution or, as I like to call it, featherlution? "Bottom line: the evolutionary story of feathers just got more complicated," Persons declares. "Maybe the amber feathers represent a new intermediate stage in feather evolution where barbules had evolved but had not yet become restricted to the barbs. Or, maybe the amber feathers record a new innovation of barbules spreading across the rachis, but this new innovation was not a part of the evolutionary path that lead to the feathers of modern birds."

A close-up of the dinosaur's plumage — and an unlucky beetle (lower right) also preserved for perpetuity in the amber. Credit: Royal Saskatchewan Museum (RSM/R. C. McKellar).

Analysis of the tail turned up traces of ferrous iron, likely residual from the hemoglobin in blood that once coursed through the veins of this doomed li'l fella. Paleo Pal Persons knew I'd to ask whether that might lead to de-extincting a coelurosaur or two. And the short answer is, sorry folks, nope.

"We won’t be cloning a dinosaur anytime soon," says Persons (womp womp). "Any genetic material that we might extract is likely to be in an unsalvageable state of decay, although I wouldn’t put the odds of finding some at absolute zero percent."

Artist rendering of a small coelurosaur that may have been similar to the animal at least partly trapped in amber 99 million years ago. It looks so happy. And like it would make a great feather duster. Credit: Cheung Chung-tat and Liu Yi.

Persons added that the team may find preserved proteins, which they could compare with those in modern birds to fill in some of the gaps in our understanding about their evolution.

The specimen comes from Kachin State in Myanmar, in Southeast Asia, which has been a hot spot

for Cretaceous amber for centuries. Alas, almost all the amber taken out of the mines there has been used for jewelry or other decorative items, particularly in China. But starting a few decades ago, an increasing number of specimens have found their way into museum collections and, eventually, under microscopes and into CT scanning machines, yielding a number of spectacular finds. This latest treasure was spotted by sharp-eyed paleontologist (and study lead author) Lida Xing of China's University of Geosciences on a visit to an amber market in Myanmar in 2015.

"I think what is most significant about the discovery is that it is a herald of things still to come," says Persons. "Back in 1860, a single fossil feather was found in the Jurassic limestone quarries of Solnhofen, Germany. One year later, the spectacular feathered skeleton of the evolutionary icon Archaeopteryx was discovered in the same quarries. I think our amber specimen is like that singular Solnhofen feather: It shows the kind of incredible preservation that is possible in the Cretaceous amber of Myanmar, and, now that we know where to look, even more astounding fossils are inevitably going to be found."

Let's take one more look at this glorious specimen (and sad beetle, lower center). Note the dark area at right showing where the tail breaches the surface of the amber: there be carbonized soft tissue, my friends, as well as iron that may be from residual hemoglobin. Credit: Royal Saskatchewan Museum (RSM/R. C. McKellar).