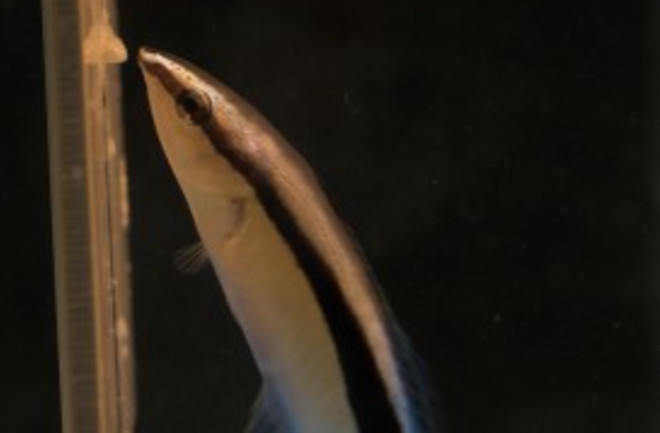 Labroides dimidiatus feeding off a plexiglas plate in the lab at the Lizard Island Research Station. Photo courtesy of Simon Gingins On the surface, cleaner wrasses seem like real nice fish. They set up their little cleaning stations on patches of reef, offering to eat any external parasites that other fish might have picked up. It's a pretty sweet deal for both sides — the cleaners get a tasty meal, while the other fish get rid of pests. But not all of these do-gooders deserve their squeaky clean reputation. Every once in a while, a cleaner wrasse will take advantage of the situation and take a bite out of the tasty mucus coating of its client instead of eating parasites like it's supposed to. This cheating behavior has fascinated scientists, who want to uncover what drives the cleaners to cheat, and what keeps them in line. "They are a very good system to study cooperation between unrelated individuals," explains Simon Gingins, who is studying the cooperation between cleaners and their clients for his PhD. Cleaner fish are dependent on their clients to eat, as they're not fast enough to take bites out of fish that don't sit and wait. "Their cooperative behavior is central to their life: most of what they do everyday is to interact with other fish species to obtain their food." Of course, the wrasse would prefer to cheat. Fish mucus is a much tastier food item to the fish, and when given the option, they prefer mucus over parasites. But for the mutualistic relationship to have evolved, there must be mechanisms in place which limit bad behavior. Previous studies have suggested that a complex interplay between reputation (switching to non-cheating cleaners), punishment (chasing/eating the cleaner), and temptation prevents cleaners from cheating all the time. But Gingins wondered if the answer might be much simpler. Not all clients can threaten the cleaners, for example. Herbivorous fish can't eat a cleaner, and thus their only way of responding to a cheater is to swim off as quickly as possible. This gave Gingins a perfect set-up for testing cleaner behavior. Using plexiglass plates to mimic client fish, Gingins and his colleagues offered cleaner wrasses mucus or parasites, adjusting how quickly the plate is pulled away if the cleaner chooses mucus. "Basically, we made the plates “behave” like a client fish would," explains Gingins. "It would stay long as the cleaner ate the less-preferred food type (corresponding to eating parasites in real life) but would be removed as soon as the cleaner ate the preferred type (corresponding to taking a bite of mucus in real life)." Furthermore, they varied the quality of the mucus, setting up a high-temptation and a low-temptation scenario. Then then watched how the cleaners reacted when the fake clients ran away.

Cleaner wrasse Labroides dimidiatus interacting with a Flowery cod Epinephelus fuscoguttatus at "Cod Hole", Great Barrier Reef, Australia. Photo courtesy of Simon Gingins. The cleaners reacted exactly how Gingins thought they would: when temptation was low and the client was quick to pull away, the cleaners cheated less. But, when the temptation was high and the client didn't run as fast, the cleaners were perfectly content to cheat. These data suggest a very simple interaction is enough to encourage cooperation. "What is interesting here is that power (the control over interaction duration) is a very simple mechanism to stabilise cooperation, as unlike reciprocity or partner switching, it does not rely on potentially iterated interactions," explains Gingins. "While more complex mechanisms such as punishment or reputational effects may receive more attention from researchers, rather simple partner control mechanisms may often be responsible for stable cooperation in nature." Interestingly, temptation drove behavior even more than the sanction of early termination. But, the scientists point out, in nature, there is probably low temptation to cheat: while cleaners preferred mucus over the parasites in a choice experiment, they regularly ate the latter anyway. To further examine the evolution of the cooperative behavior, the team tested a different species — a close relative that isn't a cleaner — with the exact same experiment. That species failed to modify it's behavior: it always ate according to its preference. "It thus appears that this strategic behavior cannot be performed by any fish," says Gingins, "but has evolved for the particular ecology of cleaners." To modify their behaviors, the cleaners had to do something truly special: they had to learn. "As the experiments involving plates and food represent learning tasks, the cleaner wrasse's superior performances are linked to adaptations in the cognitive machinery," explain the authors. Ultimately, studies like this one shed light on how species cooperate. While complex interactions may play a role over time, these results suggest that simpler mechanisms may be enough to drive cooperation, explaining how such relationships evolve in the first place. Citation: