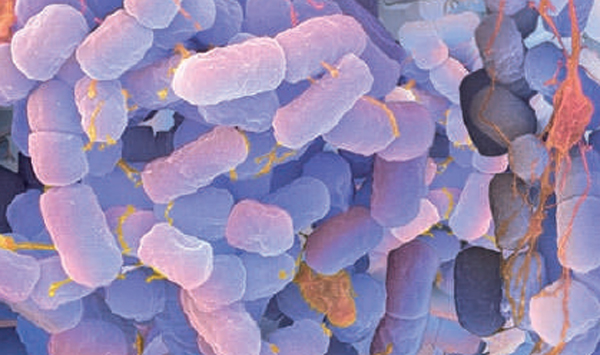 Humans are capable of great charity, taking hits to their bank accounts and bodies to benefit their peers. But such acts of altruism aren’t limited to us; they can be found in the simple colonies of bacteria too. Bacteria are famed for their ability to adapt to our toughest antibiotics. But resistance doesn’t spring up evenly across an entire colony. A new study suggests that a small cadre of hero bacteria are responsible for saving their peers. By shouldering the burden of resistance at a personal cost, these charitable cells ensure that the entire colony survives. Henry Lee from the Howard Hughes Medical Centre assaulted a vat of Escherichia coli with increasingly strong waves of the drug norfloxacin, always using just enough to seriously impede their growth without killing them outright. As expected, the group became more resistant over time. By the end of the experiment, they were shrugging off doses of antibiotics that would have previously killed them. But Lee found that not all the bacteria were equal. Most still remained vulnerable to the drug, and the group’s overall defences were bolstered by a small group of highly resistant individuals. The leaders of the resistance had all developed a mutation in a gene called all had particularly high levels of a protein called tryptophanase. Tryptophanase breaks down the amino acid tryptophan and produces indole, a chemical that acts like a call to arms. It rallies the colony into action. When bacteria detect indole, they start mass-producing molecular pumps that evict any drugs that have breached their walls. With these molecules, the beleaguered bacteria can pump out norfloxacin faster than it can kill them. Indole also tells bacteria to start toughening up. In response, the cells tune down certain genes that norfloxacin would normally use to kill them and tune up genes that protect their insides from damage. By producing indole, the most resistant bacteria were prompting changes in their weaker neighbours that greatly increased the amount of norfloxacin they could withstand. When Lee peered into the genes of the most resistant cells, he found that their own resistance was the result of several personal adaptations that averted death by norfloxacin. They had altered genes that would normally be targeted by the drug, removing its targets. They had switched on genes that protect them from chemical damage or that mass-produce produce drug-pumps. None of these mutations affect the production of indole; they just gave the mightiest cells the chance they needed to produce this rallying chemical. When Lee challenged his bacteria with another drug called gentamicin, he found exactly the same thing – a resistant elite promoting the survival of the group by releasing waves of indole. This seems to be a general tactic, rather than a drug-specific one. Producing indole isn’t easy; it takes energy to manufacture. Why should a small number of bacteria shoulder this burden to protect other members of the colony? Lee thinks that relationships are the answer. Having multiplied from common ancestors, the bacteria in the group are all related to one another and carry virtually the same genes. In this light, making a small sacrifice for the sake of genetically identical others is a good move. Reference: Naturehttp://dx.doi.org/10.1038/nature09354Image from Nature More on drug resistance: