Catching A Whiff Of T. Rex’s Sense Of Smell

Did Sue the T. rex and other members of the species have a great sense of smell? 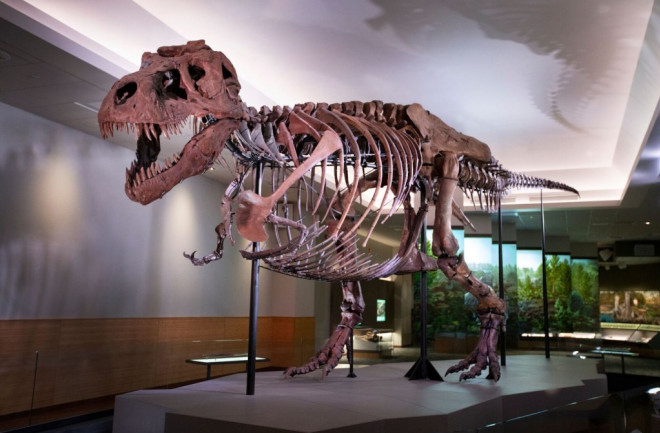 As fascinating and awe-inspiring as fossils are, the ancient bones tell us only so much about how an animal actually lived.

Take T. rex, for example: How did the animal find food, through sharp sight, great hearing or a keen sense of smell? The nose knows, say authors of a new paper on the iconic dinosaur’s olfactory ability.

In most modern animals, including birds, the size of the brain’s olfactory bulb — which processes smell — correlates with how good of a sniffer it is and, by extension, the ecological niche it adapted to occupy.

For decades, researchers have used the size of the olfactory bulb, relative to overall brain size, to gauge extinct animals’ sense of smell. Last year, for example, researchers determined that Madagascar’s mighty elephant birds were nocturnal based in part on their olfactory bulb ratio and comparisons with living birds.

Authors behind a new study went a few steps beyond this kind of comparison. In living birds, the size of the olfactory bulb is linked to both the number and diversity of smell receptors an animal has. Different genes govern which smell receptors an organism has, and how many it’s got — and this whole olfactory receptor (OR) repertoire is tied to what the animal uses smell for.

A flightless bird that hunts tiny insects at night by scent, for example, is going have a very different OR repertoire than an ocean glider looking for its next meal on the high seas.

By combining olfactory bulb ratios from dinosaurs and birds with genomic information gleaned from living birds, the authors say they’ve taken a first step toward understanding how good a sense of smell certain dinosaurs, including T. rex, may have had.

To be clear, there are no actual dinosaur olfactory bulbs (OB) sitting around the fossil record. Researchers can, however, infer the size and shape of an animal’s OB by looking at an endocast — essentially, an imprint of the brain left on the interior of the skull.

Endocasts have been a popular tool in paleontology for a long time, but the quality of the cast can vary, based on factors such as the state of the fossil itself and material used for the cast. Just something to keep in mind.

Researchers collected previously published olfactory bulb ratio data from dozens of living and extinct birds and non-avian dinosaurs, as well as an American alligator, a crocodilian.

(On the Tree of Life, birds, dinosaurs, pterosaurs and crocodilians all sit on the archosaur branch, though only crocodilians and birds are still with us.)

The team also gathered OR repertoire information, based on genomic analysis of modern birds, as well as information, where available, on the animal’s diet and body mass.

Their analysis of the data showed that tyrannosaurs, particularly the largest and most famous member of the lineage, T. rex, may have had the most impressive OR repertoires.

Don’t think that solves the predator v. scavenger debate when it comes to T. rex, however. The authors point out that the dinosaur may have followed its nose to track prey over long distances, like modern wolves do, or to find carrion, like turkey vultures, a living scavenger.

(Fun fact: the turkey vulture, included in the study, had the largest olfactory bulb ratio of any extant, or living, bird.)

While the results are interesting, it’s important not to go away assuming the study proves T. rex is some kind of 50-foot bloodhound out for, well, blood.

There’s a lot of inferring in the analysis, and the authors themselves make an important point: An animal’s sense of smell is not just about landing the next meal. Many animals use scent to communicate with other members of their species about health, reproductive status, threats to the group and much more. For example, the current titleholder of “Largest OR Repertoire For A Vertebrate” is the African elephant, a highly social plant-eater.

The study appears today in Proceedings of the Royal Society B: Biological Sciences.

African elephants like this big fella, seen walking along the road in South Africa’s Kruger National Park, have the largest repertoire of olfactory receptors of any living vertebrate. (Credit: G. Tarlach)
1 free article left
Want More? Get unlimited access for as low as $1.99/month
Subscribe