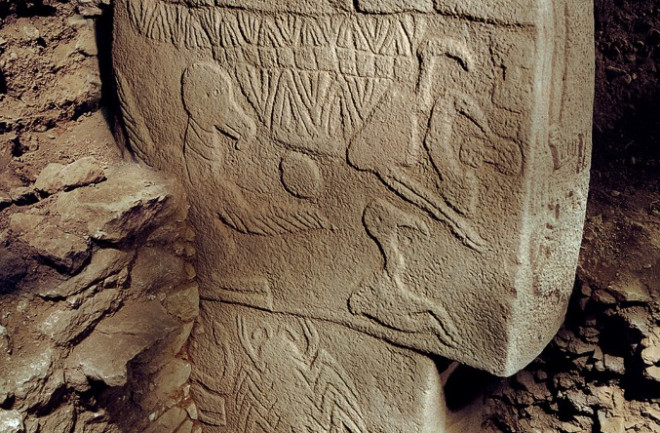 Birds and scorpions — and an apparently headless human (lower right) — adorn a pillar from one of the buildings excavated at the Neolithic site of Göbekli Tepe, where newly-discovered carved skulls point to unique ritual treatment of the dead. (Credit German Archaeological Institute (DAI)) Fragments of uniquely carved skulls — at least one of which may have also been decorated — have turned up at one of Turkey's most important Neolithic sites. Investigation into how the skulls were modified, and what they might have been used for, points to a skull cult that's the first of its kind in the world. The archaeological trove of Göbekli Tepe sits on an artificial hill in southeastern Turkey. It's a complex of monumental buildings with enormous pillars, many of them carved with animals and other symbolic art. Artifacts at the early Neolithic site date back nearly 12,000 years. (Some perspective: It's older than Stonehenge by about 6,000 years.) Researchers have long believed the site was a ritual center important to hunter-gatherers living in the region at the time. At other Neolithic sites in the region, skulls appear to have been collected and sometimes decorated with plaster or ochre. At the Neolithic city of Çatalhöyük in southern Turkey, bodies — some holding ornamented skulls — have been found buried beneath homes. No human burials have ever been found at Göbekli Tepe, however, leading to questions about what the early Neolithic culture there did with its dead. Researchers announced today in Science Advances that they have found seven skull fragments from three individuals at different locations around the site, and that all three skulls were intentionally carved with stone tools to create grooves. A primitive drill was also used to make a hole in one of the skulls, which appears to have traces of ochre.

Pieces of bone belonging to three skulls found at a Neolithic site in Turkey show signs of intentional carving: Deep grooves (A) and a drilled hole (B) are apparent on Skull 1 fragments; similar marks can be seen on Skull 2 (C) and Skull 3 (D). (Credit Julia Gresky, DAI)Just Hanging Around Based on the depth of the carved grooves, which appear to have been made by repeatedly sawing with stone tools, the researchers were able to determine the marks were made intentionally by other humans and were not the result of scalping or defleshing. Other, more superficial marks elsewhere on the fragments, however, do appear to be the result of removing the flesh. There were no signs of healing after the grooves were made, and the tools left sharp edges which suggests the bone was still elastic. These clues point to the skulls being modified shortly after the individual's death. The location of the grooves and drill mark hint at how the skulls may have been used, say the researchers.

Shaded areas represent the pieces of each skull recovered at Göbekli Tepe; red lines indicate where the deep grooves were made. A red dot on Skull 1 shows where a hole was drilled. (Credit Julia Gresky, Juliane Haelm, DAI) The researchers believe that, after preparation, the skulls may have been hung, with the grooves helping to anchor cords and prevent them from slipping. They note that the hole in Skull 1 appears to be positioned so that, suspended with a cord, the cranium would have been oriented much as it was in life. Moving Research Ahead If you're wanting an exact date for the carved skulls from Göbekli Tepe, you're out of luck. The nature of the site makes it impossible to date them to anything more precise than what's called the Pre-Pottery Neolithic A and Early/Middle Pre-Pottery Neolithic B, a span roughly 10,000-11,600 years ago. More exact dating isn't possible because the site is essentially a pile of jumbled layers of buildings that were buried and rebuilt, often by using older material — including artifacts and bones — as backfill. Although ochre and superficial marks associated with defleshing have been found on skulls at contemporary sites in the area, the deep grooves on Göbekli Tepe's carved skulls are unique not just to Turkey but to the world. Their existence points to an apparent skull cult at the site that is unprecedented in the archaeological record.