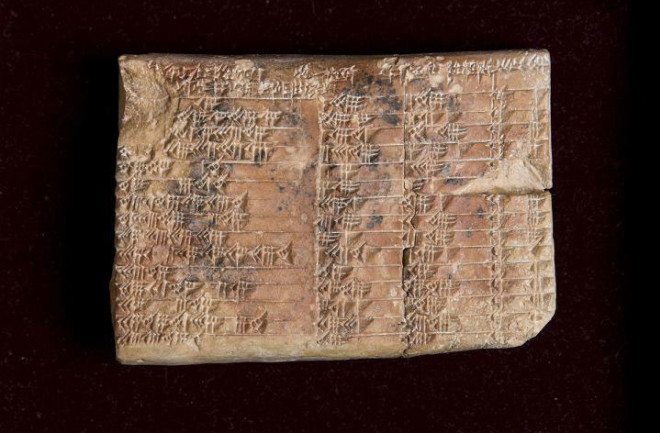 Plimpton 322 at the Rare Book and Manuscript Library at Columbia University in New York. (Credit: UNSW/Andrew Kelly) Researchers in Australia say an ancient Babylonian tablet that’s considered the world’s oldest trigonometric table was a far more powerful tool than it’s given credit for. The square tablet, known as Plimpton 322, is roughly the size of a cell phone and features four columns and 15 rows of cuneiform numbers written on it. Artifacts dealer Edgar Banks—the man who Indiana Jones is based off of— sold the 3,700-year-old artifact to New York publisher George Arthur Plimpton in 1923, and it was discovered near the ancient city of Larsa in Iraq. In the early 1940s, Brown University mathematics historian Otto Neugebauer studied Plimpton 322 and concluded that the rows and columns of numbers formed parts of Pythagorean triples, or three numbers that provide a solution to the equation a^2 + b^2 = c^2. The number series 3,4,5 is a popular “triple” example, and it’s also the equation used to describe the dimensions of right-angle triangles. Neugebauer’s theory was notable because it meant the Babylonians were articulating these integer solutions 1,000 years before Pythagoras was born. Therefore, the Babylonians, not the Greeks, were the pioneers of trigonometry. Mathematical firsts aside, it still wasn’t clear how the Babylonians used this chunk of clay. In 2001, Eleanor Robson, an expert on Mesopotamian mathematics, offered a more mundane explanation for the tablet's purpose. She demonstrated that Neugebauer’s theory doesn’t explain how certain values on the chart were chosen, how and why the table entries were ordered, or what purpose numbers in the first column served.

Daniel Mansfield (Credit: UNSW/Andrew Kelly)Robson argued that historical evidence indicated this tablet was “a list of regular reciprocal pairs” and was used as a teaching tool to run students through a set of exercises. To solve the exercises on Plimpton 322, Robson wrote, a student would have relied on a method written on another Babylonian tablet, YBC6967. She went further, writing it is “unlikely that the author of Plimpton 322 was either a professional or amateur mathematician.” Robson received the Lester R. Ford Award for her work, and her theory gained prominence thereafter. In a new study published in Historia Mathematica, University of New South Wales, Sydney lecturer Daniel Mansfield says Plimpton 322 was far more than a teaching tool. Based on his analysis, he says the table is a series of 15 right-triangles that decrease in inclination. He believes ancient engineers would have used Plimpton 322 to construct plans for palaces, canals or perhaps the Hanging Gardens of Babylon. Mansfield says the tablet represents the world's oldest and most accurate working trigonometric table—even today. That's because the Babylonians used a base 60—rather than a base 10 like we do—which permitted more accurate fractions. “This is not only the world’s oldest trigonometric table; it is also the only completely accurate trigonometric table on record...this system has enormous potential for applications in surveying, computers and education. It's rare that the ancient world teaches us something new, after 3,000 years Babylonian mathematics might be coming back into fashion,” Mansfield said. So what did Robson think of this new challenge to her decade-old theory? She was a step ahead of journalists who were all likely asking the same question. She cut to the chase on Twitter, and didn’t seem convinced by the new finding:

Now we are all intrigued

For any historical document, you need to be able to read the language & know the historical context to make sense of it. Maths no exception — Eleanor Robson (@Eleanor_Robson) August 24, 2017

I set out those basic methodological points in: https://t.co/uhFq2gCtMs and: https://t.co/mjsRIRfaXI and then did more interesting things :)

There are myriad other Babylonian tablets that are worthy of attention from mathematical historians, but Plimpton 322 has captured a fair chunk of the limelight. Mansfield and colleagues interpretation of Plimpton 322 is yet another theory in a debate that has been waged among math historians for nearly a century. No doubt, the world will continue to learn more as the experts make their way through more of these ancient artifacts.