Can Animals Show Us How to Treat Depression in Humans? 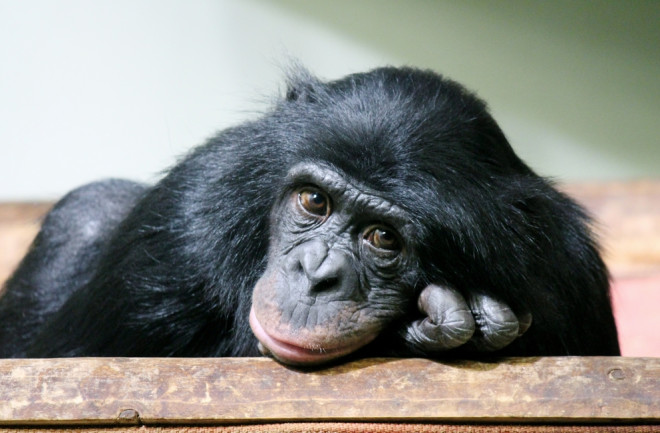 Can you tell if this chimp's depressed or not? Don't be so sure. (Credit: By Lorna Roberts/Shutterstock) Anxiety and depression have become something of a modern plague, with the NIH estimating that some 16 million adults in the US experienced at least one major depressive episode in 2015. For young people, rates of depression are even higher, and they appear to be getting worse still. To get a handle on illness, researchers often turn to animal models, and depression and anxiety are no different. Various species have served as stand-ins for humans or as valuable counterpoints to our own experience. And as with any animal model, cases involving psychological phenomenon especially, they aren’t quite perfect.

Rodents and non-humans primates have emerged as leading models for studies of depression and anxiety over the years, and they give researchers a chance to conduct more in-depth studies and try out possible treatments before moving to humans. Because animals can’t tell us how they’re feeling, researchers have established other metrics to determine how “depressed” an animal might be. One common way to do this is by tracking anhedonia, or a decreased interest in pleasurable activities. In humans, that could mean losing a love of reading or exercising — in animals, it usually means not wanting to eat or have sex. In rodents, telltale markers include losing a taste for sugar, preferentially choosing dark spaces, and giving up more easily when presented with challenging situations. Social animals like primates will lose interest in social interactions like communication and reciprocal grooming. It’s not a perfect mirror of human anxiety and depression though. In these species their behavior, depressed or not, is typically only observed in captive environments. “One problem is that many lab studies in primates and rodents are conducted in captive animals that are raised in relatively impoverished conditions compared to their natural habitat. This can cause depression-like changes,” says Olivier Berton, a neuroscience researcher at the University of Pennsylvania in an interview with National Geographic. That means the feelings of sadness or lethargy may not be strictly a response to brain chemistry, but could be instead caused by living conditions. The kind of depression we’re finding in animals might not be strictly comparable to that we find in humans, in other words. Manufactured Feelings Other researchers have attempted to induce depression through more forceful means. In a 2011 study, researchers explored the many ways in which depression and anxiety-like behaviors can be induced in rats. This included near-drownings, repeated shocks, and strobe lights, all meant to the induce periods of repeated stress. But when these emotional responses are manufactured it’s difficult to determine whether they stem from either anxiety or depression. Additionally, these stressors are not experiences rats would have in the wild. Humans suffering from depression usually haven’t been forcibly shocked or drowned. As a result, a major challenge has been to produce an effective, long-lasting depressive state in rodent research subjects. Other studies on rodents have explored the possibility for genetic modifications to create subjects that are more “naturally” predisposed to depression and anxiety — but such models would still be manufactured. Vaishnav Krishnan, a co-author of the 2011 study, says that animal models have proven useful in the process of screening effective antidepressant and anti-anxiety compounds. They’ve fallen short, however, when it comes to producing new insights.

He says new drugs to treat depression and anxiety are simply modified versions of already existing drugs on the market. As far as he knows, no new medications have emerged.

A Natural Model There is one model of depression and anxiety that is about as close to a natural model as researchers will get — the crab-eating macaque. A 2015 study

in Nature observed over 1,000 female macaques for naturally occurring depressive behavior at a breeding facility in China. 50 of those were designated as naturally depressed based on their preference for safer eating and resting places and an affinity for huddling in place. Compared to the depressed macaques, healthy macaques spent more time on high perches, socializing, and moving around. The naturally depressed subjects also performed most activities alone, or spent time trying to avoid the depression-induced macaques. They also behaved differently than monkeys who had been socially isolated to induce depression, an indication that the monkeys were experiencing something intrinsic to their minds, not just their situation. Unfortunately, the antidepressant used on the depressed macaques — ketamine — had no significant antidepressant effect. Ketamine has been shown to treat depression in humans, another reminder that animal models don't always give us the best insights into human conditions. Still, it's difficult to tell whether these monkeys were suffering from legitimate mental illness or were just unhappy. Though it may be tempting to draw parallels with monkeys based on our evolutionary proximity, the best model for depression in humans will likely remain humans themselves.