Campi Flegrei Is Warming Up, But We're Likely Not Close to an Eruption 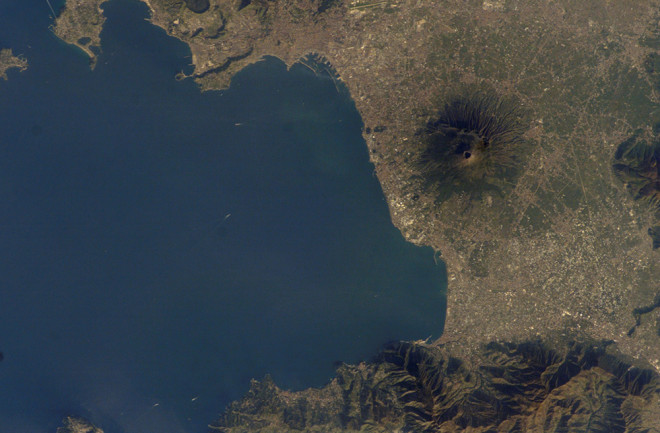 'The Bay of Naples in Italy, with the Campi Flegrei to the north (top) and Vesuvius to the east (right). Image taken 2002, <a href='https:

First things first. This new article in Science Advances I’m about to discuss does not — I repeat, does not — say that an eruption will be happening soon at the Campi Flegrei in Italy. There is nothing in the paper that says we need to elevate the alert status or that anything fundamentally has changed about the current state of the caldera. So, nobody needs to panic.

Now that I have that out of the way, let’s actually talk science!

A new article that came out today in Science Advances by Francesca Forni and others tries to answer a question about giant volcanoes like the Campi Flegrei in Italy, namely where the volcano might be in a cycle of giant eruptions. The Campi Flegrei, possibly the most dangerous volcano on Earth right now, is the other very hazardous volcano along the Bay of Naples (the other being Vesuvius).

Most of the caldera is either under the bay itself or under the town of Pozzouli and within the caldera, there are some smaller volcanic vents. The last major eruption from the Campi Flegrei was the Neapolitan Yellow Tuff (NYT) that burst forth from the volcano ~15,000 years ago. This was preceded by an even bigger explosive eruption that happened ~39,000 years ago called the Campanian Ignimbrite, which may have had a hand in the downfall of the Neanderthals.

Those were the two big “super-eruptions” but since then, there have been a multitude of smaller event such as the formation of Monte Nuovo (literally, “new mountain”) that erupted in 1538. Since then, the Campi Flegrei hasn’t produced any eruptions but we’ve seen it behave like a “restless caldera“.

This means, much like Yellowstone in Wyoming, we’ve seen earthquake swarms, hydrothermal activity like steam vents and mudpots, and the land surface rise and fall, sometimes on the scale of meters. None of these events directly lead to an eruption, but instead betray events that are happening kilometers underground, where magma might be rising up from its source tens of kilometers down or where water in the crust above the magma might be heating up over time. Such is the life of a restless caldera.

So, the question that Forni and others posed is simple: are the recent eruptions such as Monte Nuovo a sign that the Campi Flegrei is still cooling down from the NYT or is it heating up, getting ready for its potential next big blast? This is a tough question because large eruptions don’t tend to happen in isolation and at many volcanoes, there is a cycle of eruptions (see below).

There are precursor eruptions that are much smaller as magma might “leak” from the source and there are “after-eruptions” that represent that leftover stuff from a big eruption. The lava erupted pre- and post-massive eruption tend to be geochemically different, so can we identify if the Campi Flegrei is currently in a cool down or warm up?

The caldera cycle at the Campi Flegrei in Italy, from Forni and others (2018), Science Advances.

The caldera cycle at the Campi Flegrei in Italy, from Forni and others (2018), Science Advances.

Why might that be important? Well, rapid crystallization of plagioclase can cause the magma to become oversaturated with water and carbon dioxide and other volatile material because that mineral does not take in such things, so it gets left behind in the remaining magma. This leads to overpressure when the magma rises and starts to release all those gases … and that leads to eruption. So, if the erupting magma has the chemical signature of lots of plagioclase crystallizing, then we might be headed for another eruption.

What Forni and others see at Campi Flegrei is exactly that: The lava erupted from Monte Nuovo has the signature of one produced from magma that is rapidly crystallizing feldspar. Magma like that has been identified before both the NYT and CI eruptions, so this could be a “tell” that the caldera is now heading towards a new big eruption. Other eruptions between the NYT and CI show compositions that do not suggest plagioclase, so they are likely from the magma left from the big eruptions.

So, the $1,000,000,000 question is timing, right? With only two previous eruptions, we hardly have a strong pattern. However, looking at the NYT and CI eruptions, the magma suggesting plagioclase crystallization started showing up as much as 20,000 years before the big eruption. So, the lead up to the next one might also take thousands of years … and the first known eruption of this “warm up” magma since the NYT was Monte Nuovo, only about 500 years ago.

The timescales to build big eruptible magma bodies under volcanoes is an ongoing debate in volcanology. It seems in some cases, it might take hundreds of years and in others, tens of thousands. Likely, it is somewhat specific to the volcano in question based on factors like how much magma is coming into the system, how much leftovers remain from previous eruptions, how water-rich is the magma, what is the stress the magma body feels — so, lots of factors that can vary from volcano to volcano.

Even though the Campi Flegrei might be showing signs that it is in the opening stages of a “warm up”, it doesn’t mean it will happen anytime soon. It might not happen for another 8,000 years! Now, this is not to say we shouldn’t be on the lookout for the signs that an eruption is really coming, like a massive increase in earthquakes that propagate upwards, or rapid uplift of the land on the scale of possibly meters per day, or rapid heating and a change in composition of the gases being released.

Those might all be clues that an eruption is going to happen … and even if those signs show up, there might be precursors for another Monte Nuovo rather than Neapolitan Yellow Tuff redux. We now know more about the potential state of the Campi Flegrei and have identified some tools that could help us understand how other caldera work, and that is the real contribution of this work.