Californian condor not extinct yet, but still regularly poisoned by lead 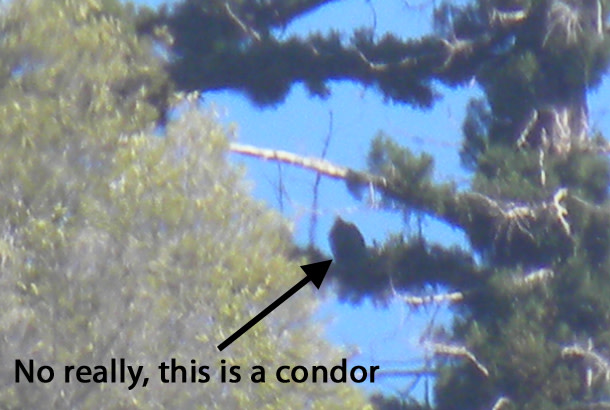 The image above, which may be the worst photo of a Californian condor ever taken, was the best shot I snapped during a four-hour condor-watching trip in 2010. But even this grainy image is important, for it captures one of the 405 last Californian condors in the world. Myra Finkelstein from the University of California, Santa Cruz writes that the condor is “a symbol of environmental tragedy and triumph”. The huge bird, with its three-metre wingspan and eerily smooth flight, was once widespread across North America. Between power lines, guns, and pesticides, their population plummeted. The birds were frequently poisoned by lead after scavenging off shot-filled carcasses, and that’s if poachers weren’t filling them with lead shot in a more direct way. By 1982, there were just 22 Californian condors left in the world, and all of them were in captivity. An intense captive breeding programme began, and it has been an apparent success. There are currently around 400 birds, more than half of which fly free and wild. But this might be a pyrrhic victory. Finkelstein has now shown that the condor’s fate is far from certain. Even though we have brought it back from the cusp of extinction, its old enemy – lead – is still a major threat. If conservation efforts are scaled back, the condor will disappear once more unless the use of lead-based ammo is severely or completely curtailed.

Scientists track all the free-flying condors with radio and GPS transmitters, and each bird gets a yearly check-up. These tests revealed that every year, more than half of the birds have levels of lead in their blood that exceed the acceptable threshold – currently set at 100 nanograms per millilitre. And every year, around 20 per cent of the birds had so much lead in their blood –450 ng/mL or more—that they were officially suffering from lead poisoning and needed medical care. Between 1997 and 2010, half of the condors were poisoned at least once. These stats might paint a bleak picture, but things are probably even worse. Lead has a half-life of 13 days in condor blood, so a yearly check-up will grossly underestimate the amounts that condors are exposed to. Feathers preserve a more accurate record. They revealed that the blood samples underestimated the birds’ lead exposure from 1.4 to 14.4 times, and that many birds had been chronically poisoned for at least a month at a time. Where does the lead come from? The balance of isotopes (versions of an element with different weights) in the condors’ blood provides a valuable clue. In one isolated case, the cocktail of isotopes was a match for lead-based paint used in a tower where the birds were roosting. But in the vast majority of cases, the isotopes pointed the finger at a different source – lead-based ammo. It’s hard to see the birds actually feeding from shot-filled carcasses, but biologists have done so in at least six cases. In all of these, the balance of lead isotopes in their blood was a match for those in the ammo they accidentally swallowed. California already has some regulations in place to restrict the use of lead ammo in condor habitat, but the blood levels in the birds haven’t fallen in the years since the rules were put into place. Finkelstein also thinks that the measures don’t go far enough. The problem is that condors are long-lived birds that come across a lot of carrion. Even if only 1 in every 200 carcasses contains lead, the condors would be virtually guaranteed to feed off a contaminated body in a given decade. Without tougher regulation, it’s unlikely that the birds could sustain themselves on their own. Using population simulations, Finkelstein concluded that if the status quo continues, the condor numbers will hold. That’s assuming that the same intensive conservation efforts that go on today will continue – daily monitoring, medical care, and so on. If those efforts are scaled back, and nothing is done about the lead, the birds will plummet towards extinction again. Only if lead exposure is removed do the birds stand a chance of re-establishing themselves without our help. Many endangered species require so much money and effort to preserve that conservationists are increasingly faced with a hard question: is every species worth saving? And, are some of them beyond hope? The Californian condor clearly isn’t. We’ve done the hard bit, and the birds seem to be capable to taking things from here. But not if they keep on eating poisonous buffets. Reference: Finkelstein, Doak, George, Burnett, Brandt, Church, Grantham & Smith. 2012. Lead poisoning and the deceptive recovery of the critically endangered California condor. PNAS http://dx.doi.org/10.1073/pnas.1203141109Image by Christian Mehlführer