Calbuco Calms Down After Explosions 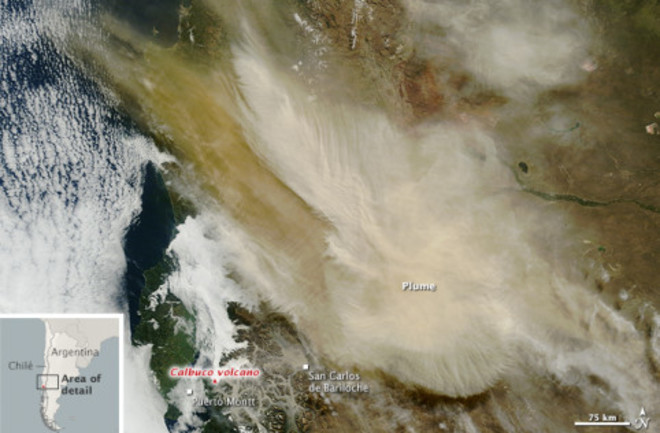 Chile’s Calbuco had a very busy day after its unexpected eruption on April 22. The initial eruption produced a ~15 kilometers plume that towered over the region and dumped upwards of 40 centimeters of ash and larger volcanic debris on some areas. The first explosion ended with lava flows* that made it down from the summit crater but it is likely that any dome that formed in the crater was destroyed by a second explosive eruption that may have reached over 15 kilometers in the early morning hours of April 23. Around 4,000 people have been evacuated from town near Calbuco.

* UPDATE April 24, 8:45 AM EDT: Well, as with many volcanic eruptions, the details changed as we learn more. Right now, it is unclear whether any lava flows were emitted during the eruption of April 22-23. The initial tweets from the SERNAGEOMIN mentioned lava flows. However, the initial report from the SERNAGEOMIN on the eruption makes no mention of lava flows but instead focuses on pyroclastic flows that travelled ~7 km and lahars that travelled ~18 km. They were able to examine the crater yesterday (4/23) and spotted new craters in the old lava dome, but again, no mention of the lava flows. So, either the interpretation of events have changed or there was something lost in translation on that first night.

Be sure to watch this exceptional video (UPDATE: here is a non-Facebook link to the video) that shows, in realtime, the start of the eruption at Calbuco. At 18:05:54 PM local time (1:37 into the video), a small plume starts to grow from the summit crater. By about one minute into the eruption, the plume has consumed much of the summit, with what look like small pyroclastic flows around the crater. Pay attention at ~3:04 into the video to see an excellent view of the vertical thrust portion of the column lofting the initial cloud of ash skyward. By the end of the video, the plume is pulsing with each explosion, with some of the material being thrust upward and some billowing sideways and flowing down the slopes of the volcano.

Considering the size and surprise of the first explosion, it is remarkable that no one is thought to have been killed or hurt by the eruption (although a hiker is still missing). The biggest issue facing the area around the volcano will be ash removal and potential remobilization of the volcanic debris by winds, in lahars (mudflows) or floods. Ash fall has been reported as far north as Pucón to the north and well into Argentina to the east. Remember, ash might look light but its really much denser than snow, averaging ~1,600 kilograms per cubic meter of dry ash (much heavy when wet). This means that any flat roofs would have upwards of 600 kilograms of ash per square meter if they are being buried by 40 centimeters of ash — a recipe for collapse. On top of that, many surface water sources might be contaminated by heavy ash fall

The plume was well documented by satellites as well. NASA’s Terra satellite captured a gorgeous image of the tan ash plume spreading across southern South America. In that same image (above), you can see some of the ash fall on the area around the volcano as well. The Suomi NPP infrared imager captured the plume (see below) and “gravity waves” in the atmosphere caused by the concussive blast of the eruption. You should definitely check out this great infrared loop from the GOES-13 satellite that captures both of the plumes from the explosions on the night of April 22. The GOME-2 satellite has also imaged the sulfur dioxide plume from the eruption spreading eastward from the volcano. Even the International Space Station got into the act, catching some of the ash plume.

Suomi NPP infrared image of the April 23, 2015 plume from Calbuco in Chile. NASA/NOAA/CIRA

It’s far too early to tell what, if any, climate impact the eruption might have, but if you’re curious, check out this post on the Carbon Brief. Right now, the SERNAGEOMIN webcam for Calbuco looks calm, but with an eruption like this, new explosion could occur without much notice as magma continues to move under the volcano.