By the Numbers: An End to the

Three decades after ecologist Paul Ehrlich warned of an impending "population bomb," the end of growth may be in sight. Warren Sanderson of the State University of New York at Stony Brook and his colleagues reached this conclusion from an analysis of trends in fertility, life-expectancy, and mortality rates. Not only has the rate of population increase slowed, the overwhelming likelihood--an 85 percent probability--is that the global population will peak before 2100. Clarence Lehman of the University of Minnesota came up with similar results: Looking only at population dynamics, such as how population density affects per capita growth, he reports that the rate peaked in the 1970s and has been falling since. 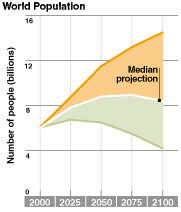