Buttery perfume deters mosquitoes by overloading their sense of smell 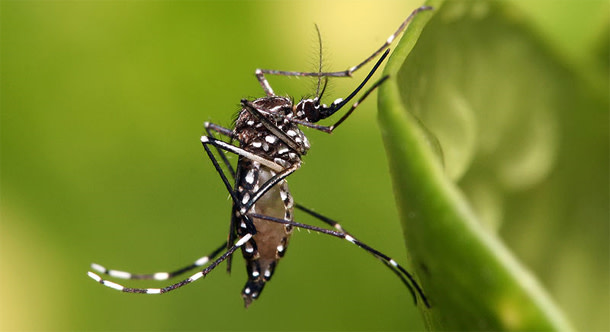 Every time you exhale, you send out a beacon to hungry mosquitoes. These vampires follow their noses. They’re exquisitely sensitive to carbon dioxide in the air, and can follow faint traces over long distances. Constant streams of the gas won’t do – the mosquitoes are waiting for the rhythmic pulses of carbon dioxide, such as those given off by a breathing human. Once they find such a plume, they fly headlong into it, tracking it back to its blood-filled source. This tracking ability makes it hard to avoid the attention of mosquitoes, or the diseases that they transmit with their bites. You could simply hold your breath to avoid giving off any telltale gases and because you would quickly die, malaria and dengue fever would not be a problem. But there is a better way. Stephanie Lynn Turner and Nan Li from the University of California, Riverside, have found a cocktail of chemicals that can turn a mosquito’s senses against it. The chemicals target the very neuron that mosquitoes use to detect carbon dioxide, causing them to go berserk. They fire so wildly that they become useless. By disabling a mosquito’s guidance system, Turner and Li have found a way of making these human-seeking missiles go careening off course. There are very few other chemicals that can effectively repel mosquitoes. DEET is one of them. An invention of the US Army, it is now the world’s most widely used insect repellent. There’s no denying DEET’s effectiveness – it works by blocking proteins that insects use to smell their food. But it is also very expensive, it could have negative side effects on our nervous system, and it can melt plastics. To top it off, some mosquitoes have started to become resistant to it. We need new repellents. To find some, Turner and Li recruited a panel of mosquitoes as an unwitting focus group. They hooked electrodes to the insects’ sense organs, wafted different chemicals past them, and recorded their reactions. One chemical – 2-butanone– set off the “cpA neuron”, a specific cell that mosquitoes use to smell carbon dioxide. It was a valuable lead. Turner and Li tested other related chemicals until they found one that did more than activate the cpA neuron – it overloaded it. That chemical was 2,3-butanedione, or diacetyl. To a human nose, it smells a bit like butter or cheese. Its effects on a mosquito, it does something more dramatic. It causes the cpA neuron to fire strongly for minutes at a time after just a second of exposure (most smell neurons fire only briefly when they detect their chosen chemical). The reaction was so strong that later whiffs of carbon dioxide had no effect. When Turner and Li put mosquitoes in a wind tunnel, the insects accurately steered towards plumes of carbon dioxide. If they had previously taken a whiff of diacetyl, they buzzed about randomly. Turner and Li even managed to boost the powers of diacetyl by blending it in a perfume with three other chemicals – 1-hexanol, 1-butanal and 1-pentanal. Together, the four substances were effective at a tenth of the dose. The perfume could even deter mosquitoes in realistic conditions. Turner and Li set up a large greenhouse containing two small huts. Both contained CO2-emitting traps that mimicked the exhalations of sleeping humans. One of them contained a small fan-driven dispenser that gave off the special anti-mosquito perfume. When the team released mosquitoes into the greenhouses overnight, they found fewer in the hut with perfume dispenser. As expected, the chemicals had created a protective shield around the building, masking the presence of the simulated human inside. This new anti-mosquito perfume has several advantages. It worked on three different species – Aedes aegypti which carries dengue and yellow fevers, Anopheles gambiae which carries malaria, and Culexquinquefasciatus, which carries lymphatic filariasis. It doesn’t have to be applied to skin. It can easily blow over a large area to protect large numbers of people. It doesn’t interfere with the repellent nature of DEET, so the two chemicals can be used in combination. And because it’s a blend of several chemicals, Turner and Li hope that it will be hard for mosquitoes will evolve resistance to it. This all seems very promising, but there is a big drawback – safety. Diacetyl is found in several alcoholic drinks and it’s commonly used to give margarine and popcorn a buttery flavour. But at high doses, it’s an irritant. It has even been linked to a rare but serious lung disease called bronchiolitis obliterans in food factory workers who inhale the stuff over a long period of time (the disease is known more colloquially as “Popcorn Worker’s Lung”). With such controversy, it’s unlikely that anyone’s going to be spraying diacetyl at high doses over sleeping people. But that might not be necessary. Diacetyl isn’t the endgame. Turner and Li are going to use its chemical structure as inspiration for new chemicals that will be even better at deterring mosquitoes and that will hopefully be far safer. As they write, “It will be a high priority to identify molecules that are effective at lower concentrations, are environmentally friendly, economical and useful in preventing mosquito-borne diseases.” The size of the prize is huge. Mosquitoes may well be the world’s most dangerous animals. They carry diseases that infect half a billion people every year, and kill millions of them. In a related editorial, Mark Stopfer from the National Institutes of Health puts the study into perspective. “The chemi­cals [Turner and Li] have tested so far, including 2,3-butanedione, have not been shown to be safe for humans,” he says. “But the principles that these compounds reveal are definitely not safe for mosquitoes.” Reference: Turner, Li, Guda, Githure, Carde & Ray. 2011. Ultra-prolonged activation of CO2-sensing neurons disorients mosquitoes. Nature http://dx.doi.org/10.1038/nature10081Image by Muhammad Mahdi KarimMore on mosquito control: