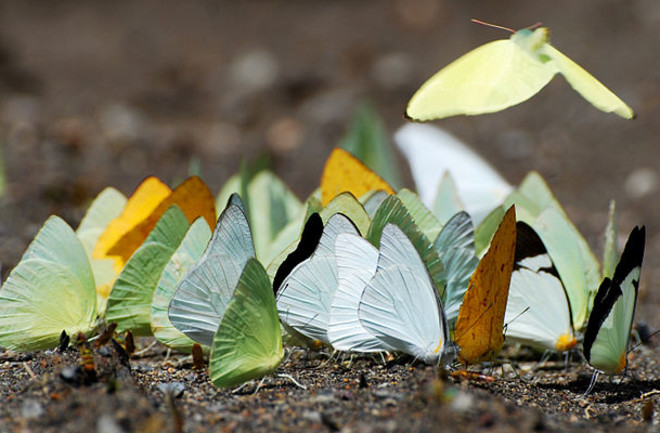 Butterflies prefer drinking urine from mountain lions over that of cows or humans—though scientists aren't quite sure why. Photo Credit:Geoff Gallice The sight of dozens of butterflies congregated in one spot might be beautiful, but if you know what they're actually doing, you might not want to get too close. When butterflies get together like this, it's usually to slurp up some nutritional goodies from an unexpected source—like, oh I don't know, animal pee. This behavior is often called "puddling" or "mudding", though the insects don't just suck on damp earth. To get missing nutrients like sodium which aren't common in the nectars they usually drink, they'll sip up turtle tears, fecal fluids, and even the juices from rotting corpses. So they're certainly not above a nice little pee puddle if it contains what they're looking for—and it does. There's sodium in basically all urine because it's used to draw the fluid from the body, though the amount varies.

Work by @andy_manu_peru, Ross McLeod et al suggests that carrion-feeding butterflies will be a powerful additional indicator of impacts of human disturbance on tropical biodiversityhttps://t.co/rhlcwHZb5kpic.twitter.com/Xbdth9l6TO

Other insects—like biting flies—are known to be drawn to urine odor compounds because they indicate the presence of their meals. Since urine is a logical source of sodium, Michael Bodri

from the University of North Georgia wondered if puddling butterflies could smell it. So he set up a baiting experiment using urine from three species with different diets. Cow urine, which was obtained from a local farm's heifer, was used as the representative herbivore pee. Mountain lion urine bought from Pee Mart (which is a serious, totally legitimate store

) was used as the carnivore sample. And human urine, obtained, well, from the most obvious source—the author himself—was the chosen omnivore. The pees were all preserved with glycerin and slightly dehydrated to prevent bacterial contamination, and then placed in 10 ml volumes in traps or sandy bait stations to see how many butterflies stopped by for a sip. It only took a few minutes after the urine was poured into the sand for butterflies to appear—a clear sign they could smell the pees. In total, the traps caught butterflies from 7 species in 3 families—all normally nectar drinkers. But there was no doubt what pee the butterflies preferred: 97 of the 117 butterflies observed feeding on the urines were drinking the mountain lion's pee. Only 14 and 6 butterflies tasted the omnivore and herbivore urines, respectively. That's particularly interesting because the urines from all three animals all have similar levels of sodium (about 100 mmols/L). So what was it about mountain lion urine that was so alluring? Bodri doesn't know. In fact, it's unclear how puddling butterflies ever find their "puddles". Some researchers have suggested that they can smell sodium—which would make sense, if that's what they're looking for—but sodium itself isn't very volatile, so it seems unlikely that enough of it would have lifted into the air for the butterflies to detect. It seems more likely that some kind of urine odor is the draw, but since Bodri didn't do a full chemical profile of the urines or their odors in this study, it's not clear what sets the cat's pee apart (all urines were reported as highly concentrated with specific gravities above 1.035; the relative concentrations of the three were not reported).

Makes you wonder what brought these beauties together, doesn't it? Photo Credit: Pavel Kirillov Given that each dietary group (herbivore, omnivore, carnivore) only had one representative pee, it's still too early to say they prefer carnivore urines in general. Future work should compare their interest in a taxonomic diversity of carnivores to make sure it's not something special to felines or even cougars. And to really understand what the butterflies are flocking to, future studies might try isolated urine components to see if the butterflies really are drawn to the salt or something else. Still, this initial work has laid the foundation for all kinds of research on lepidopteran attractants. Understanding the urine preferences of butterflies might seem strange, but it can tell us a lot about how the animals sense their world. Since the traps were all visually the same, the study shows that they really do seek out puddling spots by what they smell rather than what they see. And ultimately, gaining a better understanding of how they perceive the world not only helps us understand their behavior—it may also provide key insights into how to keep these animals alive and happy so that generations to come can ooh and ahh at the fantastic site of dozens of beautiful butterflies crowding together to drink some pee.