Bumblebees Can Fly in Air Thinner Than Atop Mount Everest 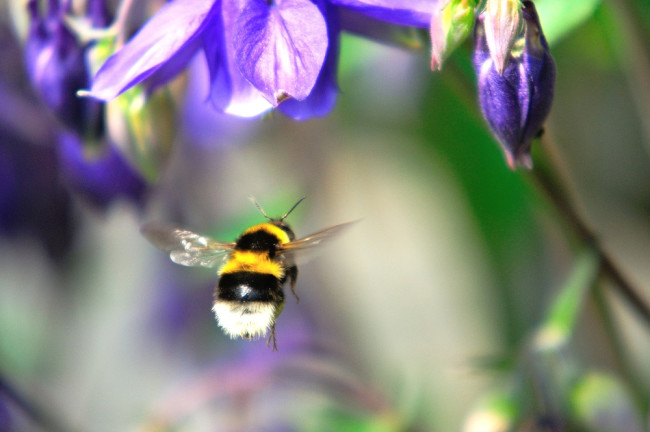 With their big bodies and tiny wings, bumblebees may not seem like impressive fliers. But now researchers report that these flying insects are masters of high-elevation flight, and can theoretically fly higher than Mount Everest.

At higher altitudes, the air is "thinner," meaning it is less dense and contains less oxygen. For humans, this makes it harder to breathe, especially when paired with the physical exertion of climbing a mountain. But Michael Dillon, an ecologist and co-author of the paper, told Smithsonian

that humans get off easy:

"For flying insects, it’s even worse. The air density is reduced, so it’s hard to actually produce forces by flapping your wings. There’s just fewer molecules in the air to push against."

Plus flying insects require more oxygen, relative to their body size, than any other species. Add cold temperatures into the mix, and it's no surprise that most insects are rarely found flying in altitudes above 13,000 feet (4,000 m).

Bumblebees are the exception. These big-bodied bugs have been found buzzing between wildflowers above 18,000 feet (5,600 m). Dillon and his colleagues wanted to see just how high these bumbling fliers could go, so they captured six alpine bumblebees and brought them into the lab. The scientists put the bees in flight simulation chambers---clear plexiglas boxes measuring about 12 inches (30 cm) on a side. Starting at 10,700 feet (3,250 m) the researchers tested to see if the bees were able to fly to the top half of the box. Then they used a hand pump to decrease the barometric pressure in the chamber, simulating an increase in altitude. All the bees were able to take off at altitudes up to 26,000 feet (8,000 m). The winningest bee reached an impressive 30,000 feet (9,125 m)---higher, even, than Mount Everest.

To find out how the bumblebees did it, researchers recorded and analyzed digital videos of the flights. They noted that the bees didn't flap their wings any faster as the simulated altitude increased. Instead, they increased their "stroke amplitude"---reaching a little farther with each beat of the wing. As Dillon told Smithsonian,

This trick explains, at least in part, why these lumbering bees can fly so high, according to the paper