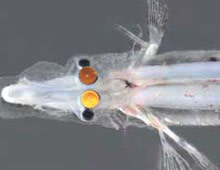 The odd-looking spookfish is the only vertebrate known to have mirrors in its eyes, according to a new report. The mirrors gather and focus light better than lenses, which spookfish also have, and appear to be an adaptation for living in the murky depths of the Pacific Ocean. Scientists discovered the spookfish's unusual anatomy after examining the first specimen of the fish ever caught alive. Researcher Ron Douglas found the rare specimen last year

in the deep waters between Samoa and New Zealand, but no one on the research boat knew what it was. "It caught my attention because it looked like it had four eyes, and vertebrates with four eyes don't exist," says Douglas [New Scientist].

In fact, the spookfish only has two. Spookfish, also known as barreleyes, are a family of deep-sea fish with tubular eyes, rather like telescopes, that point upwards to capture the minimal sunlight that filters down from above. Each eye also has a part that points downward, forming what looks like a second pair of eyes. When researcher Julian Partridge looked at sections of the spookfish eye under the microscope, he discovered that the downward-pointing parts contain mirrors, made of tiny plates of guanine crystals, that help direct light onto the retina. Partridge explains that the mirrored "diverticular" eyes help capture light emitted by other animals:

The researchers reported their finding in Current Biology [subscription required] and to the best of their knowledge, it is the first report of a vertebrate eye using mirrors to see.

"In nearly 500 million years of vertebrate evolution, and many thousands of vertebrate species living and dead, this is the only one known to have solved the fundamental optical problem faced by all eyes - how to make an image - using a mirror," [BBC News] said Partridge.

The eyes of this unusual organism are another example of evolutionary innovation.

"The use of a single mirror has a distinct advantage over a lens in its potential to produce bright, high-contrast images. That must give the fish a great advantage in the deep sea, where the ability to spot even the dimmest and briefest of lights can mean the difference between eating and being eaten" [BBC News]. Reflecting telescopes based on the same idea—using mirrors to focus light—weren't invented by human astronomers until the 17th century.