Building the Microbial Hitchhikers Guide to the Solar System 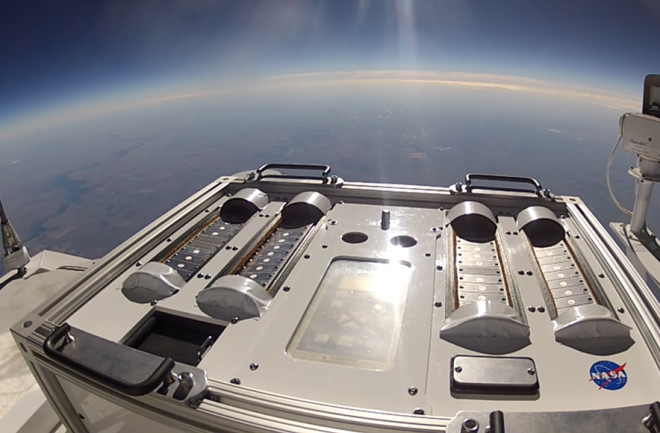 A view of the stratosphere aboard a 2014 E-MIST mission that tested the functionality of their experiment container. (Credit: NASA) There are no free rides into space, and NASA is taking every precaution to keep it that way. NASA Wallops Flight Facility will soon launch a massive weather balloon carrying hardy bacteria into the stratosphere to study microbial freeloaders that might attempt to hitch a ride into space. While the launch has been delayed over the last two weeks due to unfavorable weather, the team anticipates a successful launch next week out of Fort Sumner, New Mexico. If it turns out terrestrial microorganisms can survive in the stratosphere’s extreme conditions, there's a chance they could spoil the party if we ever discover life on another planet.

NASA hopes to someday send humans to Mars, and as part of their mission, Martian pioneers will be searching for signs of life. Here’s the catch: If the team discovers life on Mars, there’s a chance that the organisms they find could have originated here on Earth. Our microscopic luggage would not only interfere with the integrity of a very expensive experiment, but also risk contaminating Mars with terrestrial life forms.

The E-MIST project will send microbes into the stratosphere to learn more about hardy bacteria that can survive extreme conditions. (Credit: NASA/David J. Smith) Two years before the first Moon landing, NASA and the United Nations agreed to the Outer Space Treaty of 1967, which governed the way humans explored the moon and other celestial bodies. The treaty then prompted NASA to establish the Office of Planetary Protection, which exists with the sole purpose of ensuring we don’t accidentally interfere with the integrity of other objects in the solar system - like introducing microbes from Earth. But some things are easier said than done.

Years ago, NASA scientist David J. Smith discovered microorganisms, known as aeroplankton, floating in the upper atmosphere — a place that’s not associated with living things. At 125,000 feet, the upper atmosphere has similar characteristics as the Martian surface; it's extremely cold and temperatures range from -212 degrees Fahrenheit to 32; it is constantly blasted with UV and cosmic radiation; and the air pressure is so low it almost mimics the vacuum of space. Aeroplankton can soar to great heights through different methods like thunderstorms and strong upward winds. They can even arrive via the surfaces of passenger aircraft.

Bacillus pumilus SAFR-032 spores. (Credit: NASA) NASA’s so-called E-MIST experiment, which stands for Exposing Microorganisms in the Stratosphere, is escorting extreme-tolerant bacteria to a height of 125,000 feet aboard a stadium-sized scientific balloon. The balloon will remain in the stratosphere for approximately 24 hours and expose an organism, called

to the elements. B. pumilus exists in our soil, but this particular strain was also found where it shouldn’t be: in NASA’s Jet Propulsion Laboratory clean room. The clean room is designed to be as sterile as possible to avoid contaminating experiments, but B. pumilus found a way to survive, which makes it an ideal organism to study. The balloon will carry a container that’s outfitted with four robotic doors that will remain open for 6, 12, 18 and 24 hours, respectively. These time intervals will allow the scientists to understand the point at which bacteria are killed off, or if they live, how? “We are sending up a specific type of bacteria that can form spores,” says Smith. “Spores have a neat survival strategy; they’ve evolved the ability to shut down, shrink and build up many layers within the cell to surround the important parts like DNA. It actually builds a biological fortress until it finds a better location.”

The first E-MIST launch attempt on Sept. 17. (Credit: NASA) When the samples return to Earth, Smith's collaborators at NASA Kennedy Space Center will count how many, if any, survived the trip and how many remain viable. Currently, scientists don’t understand the molecular mechanics of how these bacteria work. Therefore, they will also be looking at which genes are expressed during the transition from hibernation to activation with the hopes of getting insight into their survival tactics. Once the analysis is complete, sometime in 2016, the results could officially put B. pumilus in the catalog of freeloaders to watch out for when rovers like Curiosity and Mars 2020 are sampling Martian soil for evidence of life.

The E-MIST results could also force scientists to expand their search for life in the solar system. Traditionally, the pursuit of life has focused on planetary surfaces. However, if extreme microorganisms like B. pumilus can survive in severe environments like Earth’s stratosphere, then the search for life might also start to include the atmospheres of all planetary bodies — not just their surfaces. In future missions, flybys with the appropriate scientific equipment might become just as important as rovers that dig in the soil. Finding life outside of our planet would be the biggest breakthrough in human history, but it would be pretty disappointing if our greatest discovery turned out to be a bug we brought from home.