Bubbling Hot Crater Could Have Sheltered Life After Dino Doomsday 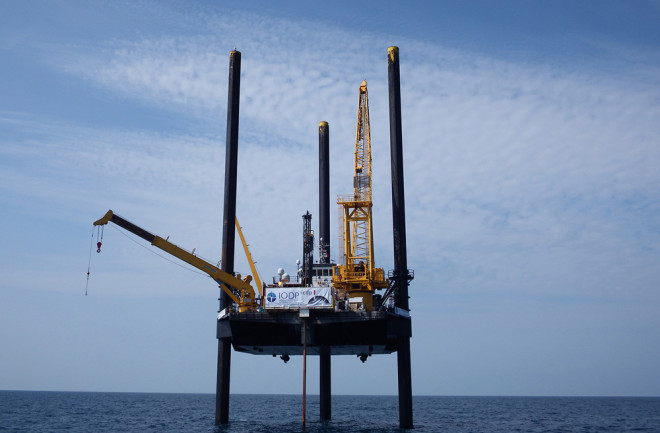 Earlier this year, scientists drilled into the central peak ring of the Chicxulub crater to reconstruct the timeline of a global catastrophe and the subsequent recovery. (Courtesy: European Consortium for Ocean Research Drilling) On one particularly hideous day 66 million years ago, Earth burned. A city-sized asteroid struck off the coast of Mexico’s Yucatan Peninsula and pushed the planetary reset button, wiping out species from plankton to plesiosaurs. Some 75 percent of all life — including every land animal larger than 55 pounds — went extinct. The calamity changed the course of evolution. Without this Chicxulub impact, named for a small nearby town, humanity would not exist. Experts have accepted this dinosaur-killing impact as fact for 25 years. But the details of how the devastation played out are still a subject of debate. Earlier this year, scientists drilled offshore near the central part of the Chicxulub crater for the first time hoping to better understand just how truly awful things were, and how life responded. Among the many riddles to be solved is exactly how long it took for life to recover at ground zero. A sneak peak at their early results was released today in Bremen, Germany, where thousands of feet of rock cores were shipped for examination and archiving at the International Ocean Discovery Program’s Core Repository. Those cores are already providing hints about the first life to return to the immediate vicinity off the coast of Mexico.

Cores from the expedition are prepped for analysis. (Courtesy: European Consortium for Ocean Research Drilling)  “We have found evidence for hydrothermal systems in the wake of the impact,” says Sean Gulick, a geophysicist at the University of Texas at Austin, and co-leader on the Chicxulub drilling effort. After the crater formed, the rock remained molten hot for some 2 million years. So, the impact that decimated life could have also created a life-sustaining spa like the ones found around deep-sea vents elsewhere on Earth today. Gulick says the team is now extracting DNA from the rock samples and searching for signs of microbial life in these layers of hydrothermal activity. That effort will wrap up this weekend. But previous research on the 35-million-year-old Chesapeake impact crater along the cost of Virginia showed that life thrived there in a hydrothermal system, and those same microbial lifeforms survive there to this day. If they find life in rocks just above Chicxulub’s impact layer, it could help researchers answer an even bigger question: How did earthly life survive regular and violent impacts billions of years ago? The answer may be that, rather then simply wiping out life, impact craters also provided an opportunity for it to thrive.