British Squirrels Are Suffering from Leprosy 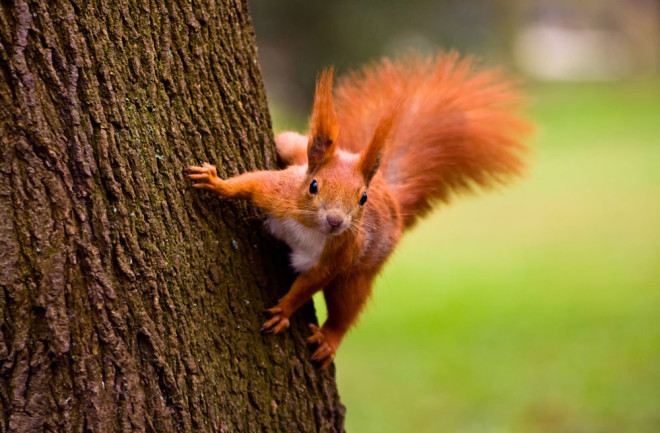 For many people, leprosy brings to mind Biblical stories of diseased people cast out from society. It’s a condition that today is largely found in developing countries, whereas in other, mostly Western nations it’s a pestilence of the past that was eradicated decades ago. But recent research has shown the disease not only persists in Britain but, perhaps more alarmingly, is also being carried by one of our best loved and most endangered native mammals, the red squirrel.

The study by researchers at the University of Edinburgh and EPFL in Switzerland found red squirrels from England, Scotland and Ireland were infected with leprosy. In particular, a group from Brownsea Island on the south coast of England had a strain of the disease virtually identical to one that infected humans in the middle ages.

So could it be that leprosy was never entirely eradicated from Britain but instead has lingered on in wildlife reservoir hosts in isolated areas? Possibly, but the whole picture is more complex, not least because of the history of the red squirrel in the British Isles. Understanding what’s going on could help us in our efforts to protect and regrow the red squirrel population.

Leprosy is an infectious disease caused by bacteria that can persist in the body for years without causing symptoms but can eventually lead to skin lesions, eyesight problems and nerve decay. This can cause sufferers to lose the ability to feel pain and so repeatedly damage parts of their body (leading to the myth that leprosy causes limbs to drop off).

The disease seems to cause similar symptoms in red squirrels, with individuals commonly exhibiting alopecia, swollen eyes, ears and digits. How serious a problem the leprosy is for British red squirrels has still to be fully investigated, although high numbers of animals sampled in this study tested positive for the disease. Given the plight of the species, which have gone from a population of millions to just 120,000 in a few centuries, it cannot be good.

The new research, published in the journal Science, compared genetic sequence data from diseased squirrels with those taken from contemporary human cases from Mexico and the skeletons of leprosy victims from medieval Europe. The results show that the leprosy in the squirrels was caused not only by the classic bacteria Mycobacterium leprae (long thought to be the sole causative agent of leprosy), but also by the more recently discovered Mycobacterium lepromatosis.

The M leprae strain found on Brownsea Island seems to be almost identical to that of medieval victims from England and Europe. This suggests the disease has persisted in British wildlife long after its eradication from the human population. Using genetic analysis, the researchers also showed the British and Irish strains of M. lepromatosis had a common ancestor just 200 years ago. By comparison, they separated from the strain found in Mexico 27,000 years ago. This suggests the disease may have actually been imported to Ireland when conservationists first tried to reintroduce red squirrels to the country from Britain in the 19th century.

The reason leprosy has continued in red squirrels while being effectively eradicated from the human population could be the result of the changing nature of our interactions with the animals since the middle ages. Red squirrels are no longer hunted for food or fur but their numbers have declined dramatically thanks to habitat destruction, other diseases such as squirrelpox and the spread of grey squirrels. Red squirrels are now largely extinct from their former ranges in England and Wales, with core populations located in Scotland.

This decline means red squirrels are now protected by law in both the UK and Ireland. Legal protection, if implemented properly, limits the amount of contact we have with a species and so can reduce our negative impact on it. But this reduced contact also means we know less about the diseases of that species and so could help explain why the rediscovery of leprosy is such a surprise.

Humans are a selfish species at heart and so the focus of our fight against disease is generally limited to those pathogens that threaten our own health or our economy. This means we tend to be oblivious to the risks from diseases among species we have limited interaction with.

This is even more likely if we associate the disease with a specific species, especially through its name or our understanding of its history. Over the past 30 years, we have been caught unawares by bovine tuberculosis in African lions, canine distemper virus in Siberian seals and tigers, and leprosy in North American armadillos.

What this latest study shows is that we should be more prepared to expect the unexpected when it comes to disease surveillance. We owe it to ourselves, and the animals we manage, to broaden our horizons and our understanding of disease dynamics in all species.

Comprehensive disease screening would help us reduce the chances of accidentally introducing pathogens into a new species or area when moving animals around for conservation reasons. Better understanding of the disease threats our squirrels face could also help us develop bespoke conservation strategies. For example, we could tailor captive breeding programs to the levels of genetic diversity needed to bolster natural resistance to disease. Hopefully studies like this will help us secure the long-term future of this charismatic little mammal.