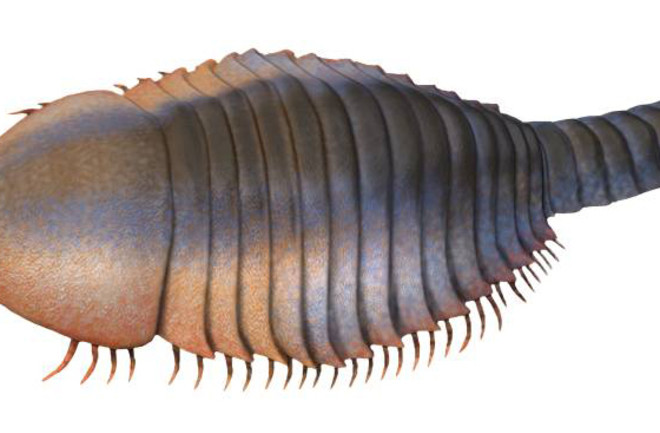 Researchers claimed that brains and other soft tissues were spectacularly preserved in fossils of fuxianhuiids like this little fella for more than 500 million years. But a new study suggests it's all just a bunch of biofilm. (Credit Nobu Tamura) Few things get armchair paleontologists as excited as the phrase "soft tissue preservation." But a new study is casting doubt on some of the most stunning of these finds: Researchers argue that claims of brains, nerves and blood vessels preserved in animals for 520 million years are just a bunch of microbial goo called biofilm. For the last decade, researchers working in Southern China have described a number of fossils from Stage 3 of the Cambrian Period, more than 500 million years ago, with a jaw-dropping degree of preservation. Finding fossils with preserved soft tissue in these rocks was nothing new: the Chengjiang locality, in Yunnan, has long been considered one of the world's greatest sites for such finds. Once home to a shallow sea, it's valuable as a snapshot of the rapid rise in biodiversity — the Cambrian Explosion — that began about 541 million years ago and continued through Stage 3. An entire marine ecosystem was preserved, including the oldest vertebrates and some animals that were entirely soft-bodied. Exceptionally detailed preservation was the result of organisms being quickly buried in mud soon after death. What was significant about the spate of recent soft tissue finds, however, was that paleontologists described entire preserved nervous and cardiovascular systems. While that would be significant in any fossil, this was the period when most major animal groups were emerging and splitting off in different directions. Being able to see finescale details of, say, brain structure or circulation would be a huge advance in understanding how the animals evolved. Hold That Thought Hang on, say another group of researchers, who have one word for all the hullabaloo surrounding the claims: biofilm. If you're a dog owner, you know biofilm. It's that thin, slippery layer of bacterial goo that forms on Fido's water bowl if you don't scrub it clean every day. Not a dog owner? No problem...if you have teeth, you've got some biofilm on them, better known as plaque. Been to a hot spring recently and stepped on slime-covered rocks to get in or out? Yep, biofilm. Pretty much anywhere you have wet surfaces and bacteria, you've got biofilm. A recently dead animal, sitting on the bottom of a shallow sea, would attract some bacteria no matter how rapidly it was buried. It's the Circle of Life. In fact, say the authors behind today's study, bacteria would be present as the gut and other soft tissues decomposed and, buried along with the remains of the animal, it would in time leave behind its own fossil of sorts. The signs of preserved circulatory and nervous systems, they say, are actually more likely to be signs of a biofilm of bacteria going to town on the animal. To determine whether they were seeing brains or biofilm, the team compared more than 800 fuxianhuiid fossils, an early arthropod ancestor, that were about 520 million years old and collected from the general Chengjiang area. The idea was that, if you've got several individuals that die and get fossilized, their remains should look fairly similar. A brain is a brain is a brain. Instead, the researchers found wide variation in what appeared to have been preserved inside each fossil. While some of the fossils came from "event beds," or layers of rock that indicated rapid burial after death, others came from "background beds," which suggested the animals were more slowly covered by sediment. The distinction between the two kinds of beds was important. Some of the previous fossils claimed as having entire internal systems preserved came from background beds, where slower burial resulted in a poorer state of preservation.

A fuxianhuiid preserved in an event bed (a), where it was rapidly buried and preserved in fine detail, compared with another individual of the same species found in a background bed (b). Despite the poorer state of preservation, some researchers have claimed to identify blood vessels and other delicate soft tissues in specimens collected from background beds. (Credit Liu et al 2018, dx.doi.org/10.1098/rspb.2018.0051) Not to put to fine a point on it, but it's hard to imagine a scenario where an animal's hard outer shell is not preserved but tiny, delicate internal nerves and blood vessels are, as suggested by some of the prior soft tissue studies. The team also looked at how modern brine shrimp and other animals decompose as analogs for what happened to the fuxianhuiids immediately after death. Perhaps not surprisingly, muscles and nerves are consistently some of the first tissues to break down. The researchers' conclusion: The wide variation in alleged internal organ preservation among fuxianhuiids, as well as the stages of decay documented in modern animals, points to bacterial biofilm, not brains or blood vessels, being preserved in the fossil record. Today's study was published in Proceedings of the Royal Society B: Biological Sciences, and it's surely not the last word on the subject. Expect much more discussion: The researchers are counting on it, noting they hope their work results in colleagues considering the possibility that slippery, gooey biofilm is behind other soft tissue fossil finds.