One of the many hypotheses in palaeoanthropology is homonids shifted to meat eating because it was metabolically rich and allowed the increase in our brain sizes. Well, there might now be some support from primate analogs finally, Study suggests evolutionary link between diet, brain size in orangutans:

In a study of orangutans living on the Indonesian islands of Borneo and Sumatra, scientists from Duke University and the University of Zurich have found what they say is the first demonstration in primates of an evolutionary connection between available food supplies and brain size. Based on their comparative study, the scientists say orangutans confined to part of Borneo where food supplies are frequently depleted may have evolved through the process of natural selection comparatively smaller brains than orangs inhabiting the more bounteous Sumatra. 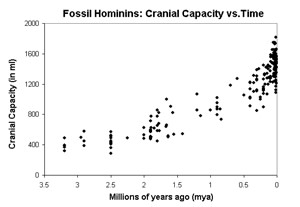 I'm sure by now you've seen Nick Matzke's chart of fossil hominid cranial capacities. Between 3 million and 200,000 years BP there was consistent long term growth in our brains (with a few possible spurts within the general trend). Brain genes have also been selected for. 25% of our caloric intake is reserved just for our expensive grey and white matter, so not only do we service it, it better serve us!