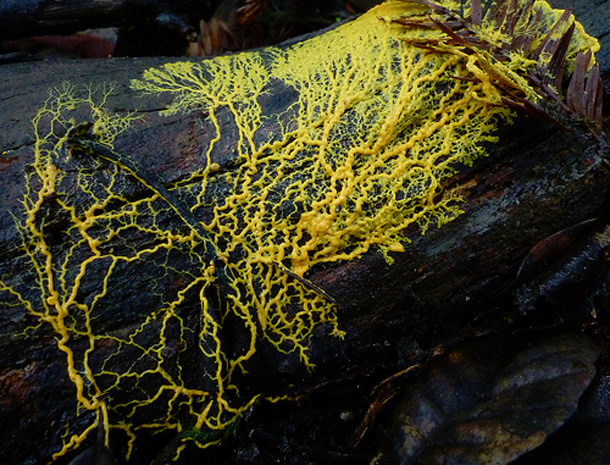 Every time we walk through a field or forest, we imprint a memory onto the land by trampling the vegetation beneath our feet. These trails can be strengthened by the erosive feet of later walkers, or diminished by re-growing plants. Over time, they act as a collective memory of the routes taken by everyone who has previously walked in that area. The path from A to B has been etched into the ground; no single person needs to store it in their brain. This sort of “externalised memory” is particularly helpful when you have no brain at all. The slime mould Physarum polycephalumbelongs to the same kingdom of life as the famous Amoeba. is a yellow blob that looks like it just oozed out of a B-movie, or possibly someone’s digestive tract. It has neither neurons nor brains, but it’s capable of seemingly “intelligent” behaviour – solving mazes, making decisions, and efficiently simulating the transport networks of various countries. Now, Chris Reid from the University of Sydney has added another ability to the slime mould’s list: an external memory, written in trails of slime, that helps the creature navigate through its environment in sophisticated ways. Reid suggests that these types of external memories may have preceded the evolution of our more familiar internal ones. Physarum moves by extending a network of tendrils called ‘pseudopods’ from a central mass, creating a pulsating yellow network that searches the forest floor for bacteria and fungi to eat. This entire network, known as the ‘plasmodium’ is actually a single cell. And yet, it behaves like a colony, where each individual segment “votes” with pressure. As I wrote in the Guardian in 2010:

Every part rhythmically expands and contracts, pushing around the fluid inside. If one part of the plasmodium touches something attractive, like food, it pulses more quickly and widens. If another part meets something repulsive, like light, it pulses more slowly and shrinks. By adding up all of these effects, the plasmodium flows in the best possible direction without a single conscious thought. It is the ultimate in crowdsourcing.

The moving plasmodium leaves behind a trail of translucent slime, consisting of proteins and sugars. Together with Audrey Dussutour from the CNRS in France, Reid found that Physarum strongly avoids ground that it has already laced with slime. “We have been researching the problem-solving abilities of the slime mould for a few years, and we had noticed that it seemed to avoid areas it had been before,” says Reid. He proved this reticence by providing Physarum with a Y-shaped arena, where one arm was covered in slime and another was not. It almost always chose to forge new ground. This isn’t a reflex – it’s more of a choice. If there aren’t any slime-free options available, then Phsyarum will willingly re-tread a slimy path. Next, Reid and Dussutour confronted the slime mould with a U-shaped trap – a challenge commonly used to test autonomous robots. Physarum starts at the top of a jelly-filled Petri dish, and its mission is to reach a goal at the bottom. The goal is rich in sugar, which diffuses through the jelly and creates a gradient that Physarum can track. But in the way, there’s a U-shaped barrier. If the plasmodium heads straight to its goal, it will get stuck. It needs to navigate around the U, and it can do so if it uses its slime to avoid areas it has been to before. Without the slime, it wanders blindly. 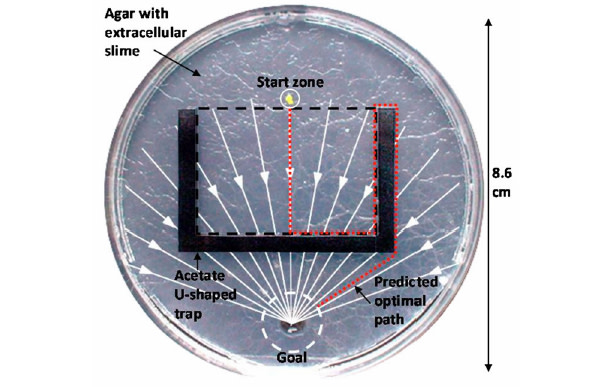 Reid and Dussutour placed the slime mould on different Petri dishes—some had blank jelly and others had jelly already coated with slime, which masked Physarum’s own trails. In the blank-jelly dishes, almost all the slime moulds eventually reached their goal, in an average time of just under 60 hours. By contrast, in the pre-slimed dishes, just a third of the moulds reached the goals, and those that did took around 75 hours. Unable to sense their own trails, they spent more than 10 times as long going over places they had previously travelled. When we think about navigating the world, we might initially think of our own maps, or of the impressive migrations undertaken by familiar animals. But navigation can happen without much brainpower. Social insects like ants can create efficient trails linking their nests and sources of food, by laying down trails of pheromones in their wake. As more of them reach the food, they add their own pheromones, making the routes even more attractive to other ants. If the trails aren’t reinforced, the pheromones evaporate. That’s exactly like human hikers, whose collective feet trample effective trails into the landscape, while allowing boring or inefficient trails to overgrow. The slime mould takes these ideas even further – it can navigate without a brain at all, using chemicals that it deposits onto the environment. Engineers have hit upon similar solutions when trying to programme independent robots that can find their own way around. It’s too complicated to equip the bots with a pre-constructed map, or to programme them to build such maps as they explore. At the other end of the complexity scale, if the robots simple react to their local environment, they can move about easily enough but often get trapped by obstacles, like a fly buzzing at a window. But add a simple imperative to “avoid the past” and suddenly these machines become much better at skirting round obstacles, and navigating complicated environments. The slime mould achieves the same feat by secreting slime, and then avoiding it. Reid suspects that such external memories preceded internal ones, and ancient creatures used them to solve problems, in a similar way to slime moulds, long before neurons and brains evolved. “This has been hypothesised before, but no one has been able to provide any evidence to support the theory, until now,” he says. Reference: Reid, Latty, Dussutour & Beekman. 2012. Slime mold uses an externalized spatial “memory” to navigate in complex environments. PNAS http://dx.doi.org/10.1073/pnas.1215037109Photos: top by Randomtruth; bottom by Reid et al. More on slime moulds: