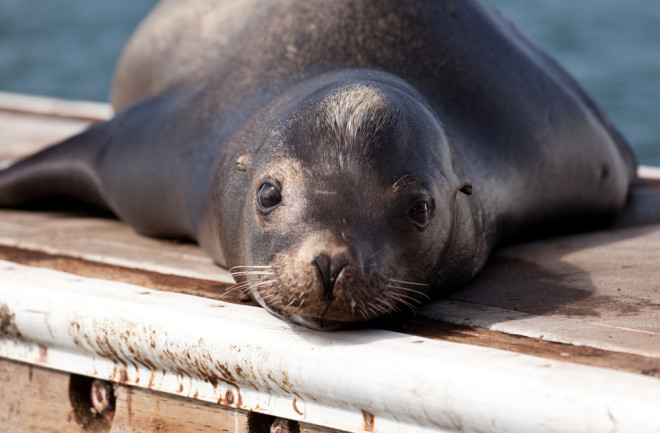 A California sea lion. (Credit: kesterhu/Shutterstock) There’s something in the water, and it’s causing brain damage in sea lions. In recent years, an unprecedented number of California sea lions have drifted onto shore looking starved, confused and disoriented — some suffering from seizures. The animals’ peculiar behavior has baffled scientists for some time, but thanks to a recent study a new culprit has emerged: a neurotoxin produced by marine algae called domoic acid.

For over a decade, scientists have known that massive algal blooms, such as the record-setter that occurred this year on the West Coast, are deadly threats to sea lions and other marine creatures. These blooms, sometimes called “red tides,” contain microscopic diatoms that produce domoic acid, which is a toxin that enters the brain and interferes with nerve transmission.

A algal bloom, or red tide, off the coast of La Jolla, Calif. in 2005. (Credit: P. Alejandro Díaz/Flickr) In human brains, domoic acid can cause “amnesiac shellfish poisoning,” and fears over the levels of the neurotoxin in shellfish delayed this year’s Dungeness crab season along much of the West Coast. It’s well documented that chronic exposure to domoic acid can cause brain lesions in sea lions, but, until now, scientists didn’t know if the toxin affected their behavior. But Peter Cook, who is now a neurological post-doctoral fellow at Emory University, studied 30 rescued and rehabilitating sea lions and established a clear link between the toxin and sea lion memory.

Cook scanned each sea lion’s brain to assess the level of damage; some sea lions in the group had brain lesions resulting from domoic acid exposure, while others were generally healthy. At The Marine Mammal Center in Sausalito, Calif., Cook also put the animals through a series of simple tests that should've been easily accomplished by all the animals In one test, sea lions were required to pass through a gate on their right-hand (flipper) side to get a fish, and then turn around and pass through the left-hand gate to get another fish. As long they kept alternating gates, they kept getting fish. “They don’t really need memory for that,” says Cook, “it’s just behavioral flow — as long as nothing interrupts the flow.” Every sea lion, regardless of their exposure to domoic acid, excelled at this task. The task wasn’t so easy when Cook disrupted sea lions’ behavioral flow by making them wait seven seconds for each gate to open. Cook found that the performance of sea lions with a damaged hippocampus — a part of the brain involved in memory — dropped off significantly when their flow was disrupted. They couldn’t remember the rules of the game, and additional hide-the-fish tests produced the same results.

Hippocampal lesions in the sea lion brain from natural exposure to domoic acid. (Credit: The Marine Mammal Center) “We knew there was some degree of brain damage in a lot of animals [exposed to domoic acid], but if it was only a little brain damage maybe that wouldn’t be that big a deal,” says Cook. “But what we saw, which really wasn’t known, was that with progressive damage these animals were really losing most of their spatial memory faculty – and that is not a good thing if you’re a complex forager who lives in a large environment.” Cook published his findings Monday in the journal Science.

Memory loss is particularly devastating for sea lions, because they are dynamic foragers that depend on their spatial memory and navigational skills to fill their stomachs. An impaired sea lion will have trouble knowing where to find food or recalling the location of their rookery, or breeding grounds. Ironically, the food that toxin-exposed sea lions struggle to find is also what’s damaging their brains. Shellfish and sardines feast on algae that may contain domoic acid, and it builds up in their tissues harmlessly. But when sea lions eat them in massive quantities, the toxin load is passed on and bioaccumulates in their bodies. The numbers of stranded sea lions have hit record highs in recent years for a number of reasons. But this year was the worst yet for stranded sea lions, and it happened to coincide with the worst-ever domoic acid-producing algal bloom. The frequency and size of these blooms is expected to increase as the ocean’s waters continue to warm, with acid-laced algae spreading further northward and affecting additional populations of sea lions and other marine predators.