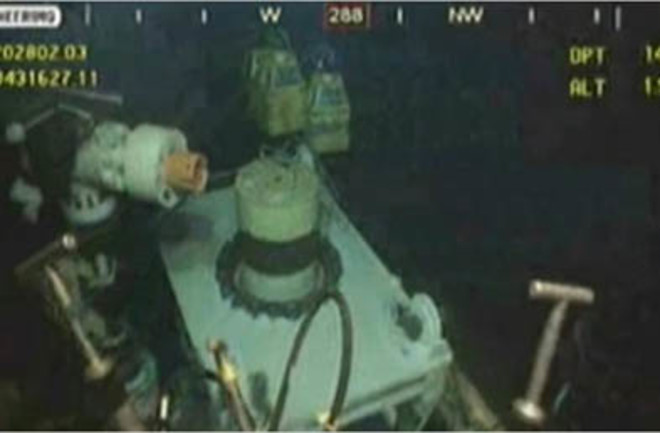 Do you hear that? That's the sound of oil not gushing uncontrollably into the Gulf of Mexico from BP's leak, for the first time in nearly three months. BP is still running tests on the new cap the company installed this week, but at least for now there's some for slight optimism. The flow stopped yesterday afternoon, and BP video feed of its leak site showed quiet containment.

The view on Thursday afternoon was eerily tranquil, just the slate blue of the deep interspersed with small white particles floating across the screen. Though the exact amount of the oil that has poured out of the well may never be known, it was suddenly and for the first time a fixed amount. The disaster was, for a little while at least, finite [The New York Times].

The task now is a pressure test, which will take place over two days. Lower pressure inside the well would mean the surrounding rocks are leaking a little; high pressure would indicate the well is sealed off. Things won't stay this way, though. The capping stack—as this newest in a long line of BP jargon is known—isn't meant to be any kind of permanent stopper. It provides the option to seal the well temporarily for testing (or if a hurricane sweeps through

), but it may not stay on after the tests are done. If the pressure test show the well is leaking still, BP will resume pumping oil to its tankers on the surface. Meanwhile, the company is still trying to reach the leak site with its (hopefully) end-all solution, the relief wells.

Regardless of whether BP and the government decide to keep the well closed at the top, the ultimate solution to the blowout is a mud and cement bottom-kill from a relief well that is four feet from Macondo laterally and has only about 150 feet vertically to drill. During the integrity test, drilling of the relief well has been suspended as a precaution against oil and gas surging into the new hole from Macondo [Washington Post].

Even if BP succeeds, its convoluted and strung-out attempts to cap the leak may look simple compared to the cleanup task ahead. But for now, just for a moment, it's a sigh of relief to pull up the video feed and see no black clouds of crude bursting into the bottom of the sea.

"I was excited. I was happy about it," New Orleans resident Michael Jackson, 50, said of reports that the gushing oil well had been capped. "But who's to say that cap's going to hold?" [CNN].

Recent posts on the BP spill: 80beats: One Cap Off, One Cap On: BP Tries Another Plan To Catch Leaking Oil