'Boxing' Ants Can Trade Over 40 Blows a Second 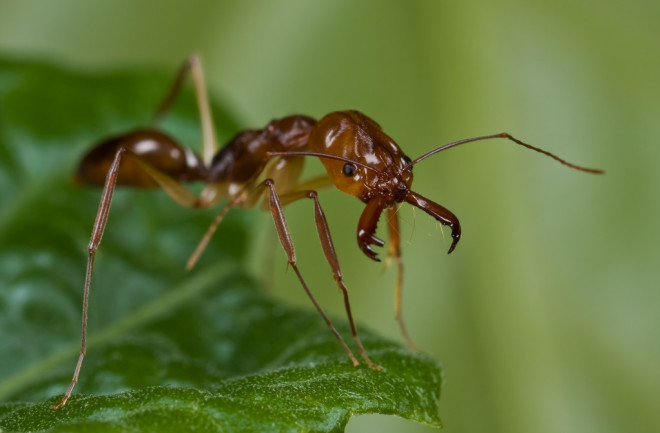 A trap-jaw ant. (Credit: kurt_G/Shutterstock) To settle a labor dispute, ants put up their dukes. And when the bell rings, they can unleash a flurry of punches in the blink of an eye. A new study from researchers at the University of Illinois and North Carolina State University used slow-motion videos to watch trap-jaw worker ants square off in antenna boxing matches. Trap-jaw ants communicate via pheromones, but when it's time to divvy up tasks peaceful negotiation is off the table. These fast-paced antenna slap-ups, called rapid antennation, determine which ant must perform less desirable chores for the good of the colony. Researchers knew about these dust-ups, but no one had measured how fast rapid antennation really is.

Led by undergraduate researcher Sean O'Fallon of the University of Illinois, the research team observed four species of trap-jaw ants to measure how quickly they traded blows. The slowest, and largest, of the four species, Odontomachus rixosus, tallied 19.5 hits per second. The title for quickest segmented boxer in the study went to Odontomachus brunneus, an ant species found in southeastern United States and parts of Central America, which delivered 41.5 strikes per second. The team published its findings this month in the journal Insectes Sociaux. [embed]https://www.youtube.com/watch?v=7VMebatFr6k[/embed] Socialized aggression is an integral part of life for many animals, from lions competing for control of a pride to elk fighting over mates. Head-to-head conflict helps form a natural hierarchy that favors the strongest members of a group, increasing its overall fitness as time progresses. From the outside, busy ant colonies can look chaotic, but they are governed by a strict social order. Ants are eusocial, which means members of the colony pitch in to perform specific tasks. In the case of trap-jaw ants, status is conferred based on their boxing ability. Champion trap-jaw ants stay home to tend to the colony, while the losers must venture outside to gather food.

Trap-jaw ants are remarkable for another speedy adaption that earned them their namesake: their massive mandibles. At rest, the ants keep their mandibles locked in an open position, but they can slam them shut in an instant to kill prey or sever objects. If a trap-jaw finds itself in a jam, it can even use its powerful jaws to perform a backflip to escape danger.

During boxing matches, ants keep their powerful jaws holstered; the end game is social dominance, not physical harm. And in the absence of any kind of ant referee, they'll continue fighting until one ant admits defeat, and decides that looking for food is a better option than getting bopped in the head with 40 antenna strikes.