They're burly, brave, and wee-headed. 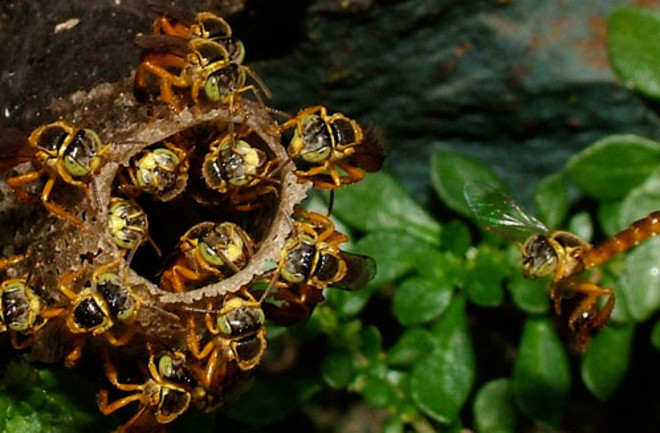 In a hive of up to 10,000 Jataí bees, 1 percent are burly guardians (shown here) who take down robber bees. | Courtesy Francis Ratnieks/Dr Christoph Gruetter

The stingless jataí bee lives in a vicious world where marauding robber bees steal its food and plunder its hive. For protection, Jataí worker bees have evolved a specialized variant: the bouncer bee, a burly guardian with massive legs and a surprisingly small head.

But while studying Jataí in São Paulo, entomologist Cristiano Menezes noticed that the females at the hive entrance looked larger than other workers. Measurements from 12 bee colonies confirmed that. Some Jataí, specialized for guard duty [$], are 30 percent heavier, with legs about 40 percent larger than those of foragers. Their heads are oddly disproportionate, only 25 percent larger than foragers’ noggins.

Guarding is a grisly job made necessary by food raids from Lestrimelitta limao, a strong-jawed robber bee. Bouncers chomp down hard on the base of the enemy’s wing. But intruders can twist around and decapitate a guard with a powerful bite. “You’ll often see a robber bee walking, and on each wing is a separate Jataí mandible,” says entomologist Christoph Grueter, who published the work with Menezes. Even when killed, the bouncers prevail: Robbers with Jataí heads on their wings can no longer fly.