Bonobo males get sex with help from their mums 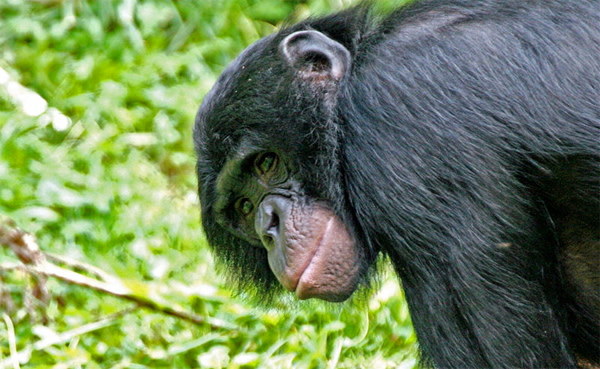 Most human men would be appalled at the idea of their mothers helping them to get laid. But then again, we’re hardly as sexually carefree as bonobos. While these apes live in female-led societies, the males also have a strict pecking order. For those at the bottom, mum’s assistance may be the only thing that allows them to father the next generation. Martin Surbeck from the Max Planck Institute for Evolutionary Anthropology found that bonobo mothers will help to usher their sons into the best spots for meeting females, and they’ll sometimes help their sons in conflicts with other males. Thanks to their help, their sons get more shots at sex than they would otherwise. Meanwhile, the dominant male is frequently denied by these supportive mothers, who help to curtail the sexual privileges afforded by his rank. This type of maternal support is possible in bonobo societies because males tend to stay with the group they were born into. Even after they become adults, they still stay in frequent contact with their mothers. Surbeck found that a mother will only help their own sons; unrelated males get no aid. In helping her own young, who share half of her DNA, a bonobo mother can ensure that her own genes have the best chance of being inherited by another generation. In helping her sons, she indirectly guarantees her own success. Surbeck spent twelve months observing a group of more than 30 wild bonobos at Salonga National Park in the Democratic Republic of Congo. He showed that the males formed a clear hierarchy and the dominant individuals got the most sex. This may seem obvious but bonobo societies are often portrayed as egalitarian affairs. The ties between rank and sex aren’t clear in captive animals, and previous studies have disputed whether this link exists in the wild. Surbeck’s data clearly show that it does. For males in the middle and bottom rungs of the social ladder, the odds of a successful sexual encounter went up when mum was around. In groups with no mothers, the alpha male accounted for 40% of all the sex; if mothers were present, the big guy was only involved in 25% of matings. Surbeck found no evidence that bonobo males engage in rape or that females resist mating attempts. Instead, the male get’s the lion’s share of sex by physically monopolising females and by directly competing with other males for mating privileges. It’s possible that mothers help their sons by getting directly involved in fights. Indeed, they sometimes tried to interfere with the sexual encounters of unrelated males, while blocking any attempts to meddle with their sons’ sex lives. But these interventions were relatively rare and Purbeck thinks that they’re relatively unimportant. Instead, Surbeck thinks that mothers are probably using their status to usher their sons into the right spot within the group, allowing them to interact more closely with females. They’re more matchmakers than bodyguards. Reference: Proc Roy Soc B http://dx.doi.org/10.1098/rspb.2010.1572Image by Kabir BakieMore on bonobos: