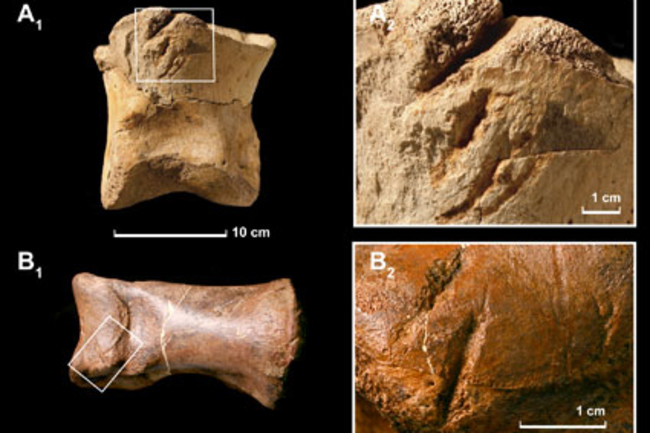 New bone evidence suggests that Tyrannosaurus rex was not only a scavenger but also a cannibal. While researchers frequently find evidence of bites on bone fossils, Nicholas Longrich was surprised to find big, predator-sized tooth marks on T. rex bones--because the T. rex was the only large carnivore in the area, and therefore the only dinosaur who could have left those marks.

"These animals were some of the largest terrestrial carnivores of all time, and the way they approached eating was fundamentally different from modern species," Longrich added. "There's a big mystery around what and how they ate, and this research helps to uncover one piece of the puzzle." [The Guardian].

Longrich found a total of four bones--three from T. rex feet and one from an arm--that show marks of cannibalism. The location of the bite marks suggest that they were made after death; for example, some of the markings are in areas that would have been obscured by joints in a living animal. One toe bone showed multiple bite marks made by a smaller animal, and Longrich notes that a large T. rex probably wouldn't let another T. rex gnaw on its foot. There had to be another explanation, Longrich says:

"It's kind of like the turkey on the fifth day after Thanksgiving—you're trying to get the last bits of meat off it.... For the toes to be of interest, the carcass must have been pretty much picked clean." [National Geographic].

Only one other dinosaur species, the Majungatholus, is known to have been a cannibal. But this new research

, published in PLoS ONE, suggests that the practice may have been more common than previously thought. Even some modern predators, like crocodiles and komodo dragons, engage in cannibalism.

Hans-Dieter Sues curator of vertebrate paleontology at the National Museum of Natural History in Washington, D.C., isn't at all surprised by T. rex's taste for its own flesh and blood. "Meat-eaters of all kinds feed on dead animals, which, after all, are just meat lying around for the taking," said Sues, who was not involved in the study. "Even pigs, which are omnivores, eat other dead pigs. There is nothing remarkable about this at all." [National Geographic].

Related content: 80beats: Yes, T. Rex Had a Bad-Ass Sniffer. But Was It a Bad-Ass Hunter?

80beats: T. Rex May Have Been a Hot-Blooded, Sweaty Beast