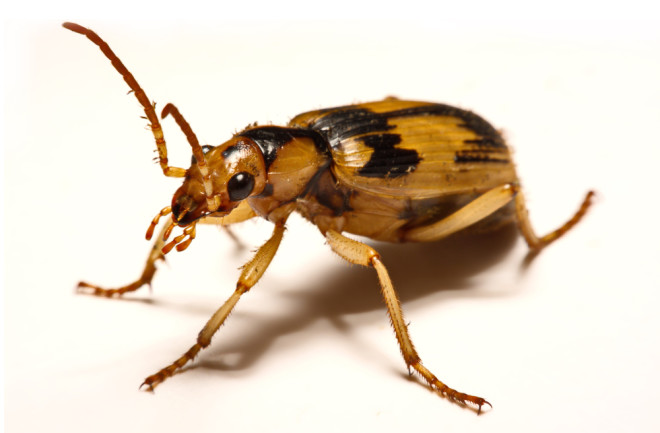 (Credit: Shutterstock) Bombardier beetles are the Agent Ks of the insect world. You’ll recall, Men in Black’s Agent K (played by Tommy Lee Jones) exacts revenge after being swallowed by a giant cockroach alien at the New York State Pavilion. Agent K went down the alien’s gullet, but fired his weapon from inside the beast’s stomach (if it had one) blowing the bug into smithereens and spreading gooey guts everywhere. It was a fitting grand finale to the first installment of the franchise. Though not as dramatic, bombardier beetles pull an Agent K when toads try to turn them into a snack. That’s because the bombardier beetle is a walking chemical weapon. Structures inside its abdomen contain reservoirs of hydroquinone and hydrogen peroxide. When threatened, the beetle mixes the chemicals together and shoots the resulting hot, stinky spray out of their rears. The gas reaches a boiling temperature of 212 degrees Fahrenheit, and can be fatal to insects that cause it trouble. https://www.youtube.com/watch?time_continue=79&v=BWwgLS5tK80 Bombardier beetles belong to the tribe Brachinini, which comprises some 649 species in 20 genera, but the defensive behaviors of only a few species have actually been studied, say Shinji Sugiura and Takuya Sato of Kobi University in Japan. In May 2016, Sugiura and Sato gave one unlucky toad a bombardier beetle to watch their defensive behavior up close. The toad happily swallowed the beetle, but within 44 minutes, it vomited the beetle back up. The bug was covered in digestive juices but alive and well, seemingly unaffected by its journey. The scientists were intrigued. Other insects can shoot toxic chemicals into a frog’s stomach to make it puke; the thing is, not many insects survive the ordeal. Sugiura and Sato wanted to dig a little deeper into what makes a successful escape, and whether beetles’ chemical weaponry indeed causes toads to vomit. So, they fed more beetles to toads. They collected a variety of adult bombardier beetle species, mostly Pheropsophus jessoensis, and two species of juvenile and adult toads—Bufo japonicas and Bufo terrenticola—from the forest edges in central Japan. In a “treated” group, researchers poked the beetles until they expended their noxious spray. Then, they fed them to toads. Most of them perished.

This beetle escaped from a toad 88 minutes after being swallowed. (Credit: Sugiura S, Sato T. 2018 "Successful escape of bombardier beetles from predator digestive systems." Biol. Lett., 20170647, http://dx.doi.org/10.1098/rsbl.2017.0647) Then, they served up the fully "loaded" beetles. Toads caught these bombardiers with their tongues, “However, an explosion was audible inside each toad, which indicates that P. jessoensis ejected a chemical spray after being swallowed,” the researchers wrote (emphasis ours). Not every “loaded” beetle survived: In trials, they induced vomiting in 34 percent of B. japonicas toads, and 57 percent of B. torrenticola toads. However, all 16 beetles that the toads vomited up were still alive and well, although covered in frog digestive juices and mucus. Fifteen of the 16 beetles survived two weeks longer after being vomited. The beetles could survive anywhere from 12 to 107 minutes inside the toads after being swallowed. https://youtu.be/3oFpmHjolLs Researchers noted that the larger the beetle, the better the odds of survival. Naturally, the smaller the frog, the more likely it was to puke. The researchers say their results demonstrate the importance of prey-predator size relationship during meal times in the wild. Additionally, researchers hypothesize that the beetles have either evolved to survive frog digestive juices, or their chemical cocktail may decrease levels of enzymes and digestive fluids inside the toad, reducing its ability to kill the beetle. They published their findings Tuesday in the journal Biology Letters. It’s an observation that’s hard to swallow, at least for toads.