Bold Spiders Rub Off On Their Meek Compatriots 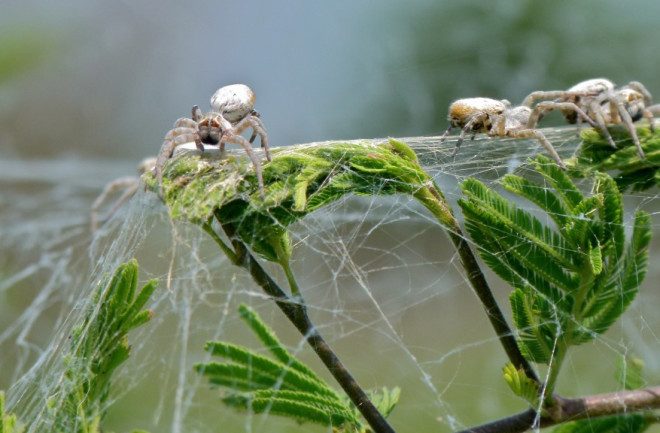 Stegodyphus dumicola spiders. (Credit: Wikimedia Commons) A bold or aggressive person can change the dynamic of a group. That happens in spider colonies, too. In a study published this week in Proceedings of the Royal Society B, researchers show that bold spiders can change the behavior of other spiders. The meek spiders start copying the behavior, something that can both help and potentially harm the colony.

Researchers collected colonies of Stegodyphus dumicola in South Africa. They created 24 of their own spider colonies consisting of 10 females each (males were not used because they are short-lived and rare, making up only 12 percent of the population, the study says). The colonies were observed for six and a half weeks. The study also used a statistical model to crunch data. Boldness was measured not by calculating a spider’s quick action in snagging prey, though that was an outcome of boldness. Rather it was by shooting a puff of air on spiders and timing how long they took to unfurl their legs from a ball and act normally again. Bold spiders did this quickly; meek spiders took a long time to unfurl. The spiders interpret the puff as predation by a bird. Boldness rubbed off in the colony. “When spiders interacted with others that had a different boldness than themselves, the spider with the lower boldness tended to increase its boldness,” the California researchers write.

In a surprise, bold spiders were not more likely to interact with other spiders. They seemed to need time to themselves. They were a bit like brave three-spined stickleback fish, which are somewhat aloof to their mating partners. Bold spiders also tended to explore more terrain when hunting for prey outside the nest. They brought home more food than their shy colleagues. The researchers raised the possibility that, because of their rambling ways, bold spiders might also bring back more diseases to the colony. Though this area needs more study, the propensity for bold spiders to wander could be why the average S.dumicola colony has many more meek social spiders than bold ones. The meek spiders also might be more consistently social, an important component in a spider colony. Bold spiders also become less bold with time, the study says. A little boldness can go a long way.