Body Language of Winners and Losers Could be Innate 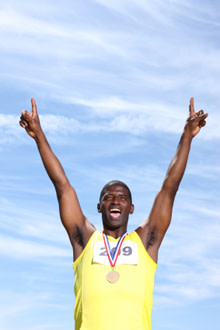 When athletes throw a touchdown, hit a home run, or win a race, they often raise their arms straight up to celebrate. A new study suggests that these kinds of gestures are deeply rooted in our minds, and not just force of habit. Jessica Tracy of the University of British Columbia in Vancouver, Canada, and David Matsumoto of San Francisco State University looked at pictures of judo competitors from both the 2004 Olympic Games and Paralympic Games, trying to see if blind and sighted people reacted differently to victory, since the blind could not have learned victory gestures socially by watching others. In their study, published in the Proceedings of the National Academy of Sciences[subscription required], they found that blind athletes who have never seen such a display make similar gestures of pride as sighted athletes when they win, and also slump their shoulders and narrow their chests in shame when they lose [LiveScience].

The body language of victory seems to be fairly universal, but shame is slightly different—in North American and west Eurasian countries, the shame response was somewhat more muted, which could be due to a Western cultural norm of hiding one's shame [Los Angeles Times]. However, blind athletes from Western countries showed shame more often than their sighted counterparts, Tracy says, probably because they were unable to watch others and learn the cultural norm against showing shame.

[Telegraph]. So when you see arms raised in victory at the Beijing Olympics, you might really be seeing an symbol of dominance that humans developed long ago.

In the end, it's all about evolution.

The discovery by psychologists suggests that these gestures of pride and shame are hard wired into the human brain, probably because they were universal signs of dominance and submission among our ape relatives and ancestors

HealthCan Stress, Loneliness and Sleep Deprivation Make You More Prone to COVID-19?
Recommendations From Our Store