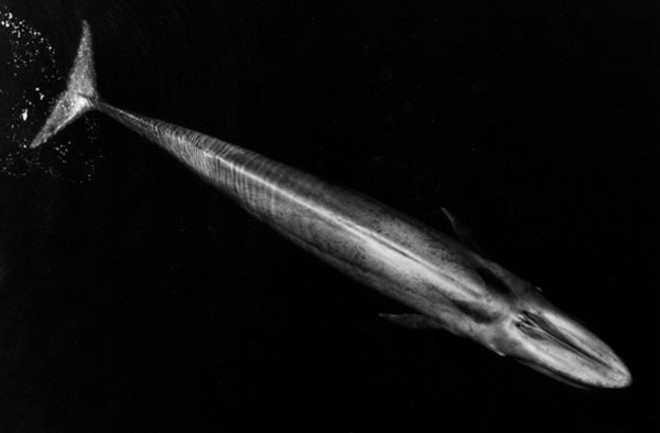 The blue whale is the largest animal that has ever lived. Ironically, it sustains its massive bulk by eating some of the smallest creatures in the ocean – krill. A foraging whale lunges into a swarm of these shrimp-like animals, accelerating to high speed with its mouth open at a right angle. Pushed back by the rush of water, its mouth expands and its tongue (itself the size of an elephant) inverts to create more room. The whale engulfs up to 110 tonnes of water and any krill within is filtered out and swallowed.

There’s every reason to think that filtering out small prey is an incredibly efficient way of feeding. The largest fish, both living (the whale shark and basking shark) and extinct (Leedsichthys), are all filter-feeders. And the biggest of the whales – the blue and fin – both use this technique. But no one has ever put the reputed efficiency of filter-feeding to the test, by calculating how much energy a blue whale spends on its lunges and how much it gets in return. Jeremy Goldbogen at the University of British Columbia is the first.

Goldbogen tagged 265 blue whales off the coast of California and Mexico, attaching recording devices to their backs when they surface. The data-loggers recorded the whales’ position, their acceleration, and the noise and pressure of the surrounding water. The noise was important – by measuring the sound of water rushing past the animal, Goldbergen could work out how fast it was travelling.

In total, he managed to record over 650 feeding lunges. On each one, the whale accelerates to a top speed of 8 miles per hour in less than a minute. If that seems low, bear in mind that this is an animal that weighs 180 tonnes; for comparison, Michael Phelps swam the 100m butterfly at a measly 4.4mph. Every attempt costs a huge amount of energy, around 770 to 1900 calories. Worse still, the water that rushes into the whale’s mouth produces so much drag that it grinds to a virtual halt. To lunge again, the whale needs to build up speed from a standstill, and it will do so around three or four times on a single ten-minute dive.

Nonetheless, when Goldbogen plugged the data from his recorders into a simulation of a feeding whale, he found that the lunge is staggeringly efficient. Despite the massive outlay in energy, the whale easily recoups anywhere from 6 to 240 times that amount, depending on how big it is and how tightly packed its krill targets are.

If a big whale attacks a particularly dense swarm, it can swallow up to 500 kilograms of krill, eating 457,000 calories in a single monster mouthful and getting back almost 200 times the amount it burned in the attempt. A smaller whale lunging at a sparse collection of krill would only get around 8,000 calories, but that’s still 8 times more than what it burned. Even when Goldbogen accounted for the energy needed to dive in search of prey, the whales still regained 3 to 90 times as much energy as they spent.

For comparison, sea otters get around 4 calories for every one they burn, and Weddell seals get around 10. If blue whales happen across a particularly thick glut of prey, their feeding efficiency is about ten times greater than for any other sea-going mammal.

All of these record-breaking numbers are probably a pale shadow of the true efficiency of a hunting whale, because he was being fairly conservative about the krill in his simulations. Photographs of krill suggest that these animals can gather in swarms a hundred (or even a thousand) times greater than those that Goldbogen used. If a whale swam into one of these swarms with mouth agape, it might even recover 1000 times more energy than it spent.

An efficient lifestyle is a big boon to the blue whale. Every year, it migrates from rich feeding areas close to the pole to relatively poorer mating areas towards the equator. If it’s to survive, it needs to feed as effectively as it can during the summer to build up a thick layer of blubbery reserves to fuel it through the harsh food-starved winter.

Update: For more on Goldbogen’s work, you have to read this great post by Carl Zimmer, where he explains why giant whales are a bit like parachutes.