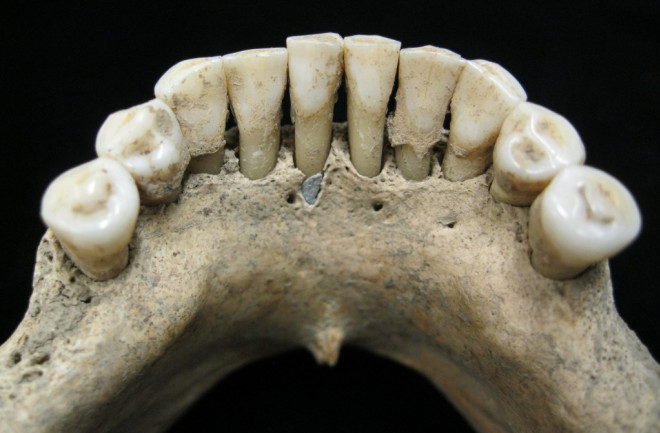 Lapis lazuli pigment entrapped within the dental calculus on the lower jaw of a medieval woman. (Credit: Christina Warinner)

For the medieval Christian, opening an illuminated religious text was like opening a window into the sacred. These lavishly decorated books contained teachings of the church and helped deepen the beliefs of the faithful. The luxurious materials used in their creation glittered in the light, offering an elevated spiritual experience.

A brilliant blue pigment known as ultramarine, a color often associated with holiness and royalty in art, was reserved for special features of this artwork — such as the robe of the Virgin Mary. Derived from the lapis lazuli stone mined only in Afghanistan, the pigment was once considered more precious than gold.

Now, researchers say they’ve discovered one of the most prized pigments in art history in a peculiar place — in the dental plaque of a woman buried at a monastery at the Church of St. Peter in Dalhaim, Germany around 1000-1200 AD. The researchers say the find represents the “earliest direct evidence that religious women in Germany used ultramarine pigment,” challenging gendered ideas about the role of women in creating one of the highest forms of art in medieval times.

During the European Middle Ages, Afghanistan was the only known source of the rare blue stone, lapis lazuli. Lapis lazuli contains different minerals that contribute to its unique appearance, including lazurite (blue), phlogopite (white), and pyrite (gold). (Credit: Christina Warinner)

During the European Middle Ages, Afghanistan was the only known source of the rare blue stone, lapis lazuli. Lapis lazuli contains different minerals that contribute to its unique appearance, including lazurite (blue), phlogopite (white), and pyrite (gold). (Credit: Christina Warinner)

“Here we have direct evidence of a woman, not just painting, but painting with a very rare and expensive pigment, and at a very out-of-the way place,” said Christina Warinner of the Max Planck Institute for the Science of Human History in a statement. Warinner is the senior author of a paper detailing the findings published in Science Advances.

The practice of illumination — adding decorated letters, borders, and scenes to religious texts — first emerged in the fifth century and peaked in popularity across Europe in the Middle Ages. Each text was carefully crafted by hand using precious materials, such as gold leaf and ground gemstones, to decorate parchment made from animal skin. Producing a single book was a laborious process that could take months or even years to complete.

Most illuminated manuscripts belonging to this era were produced by monasteries for liturgical use and libraries. Others were commissioned by wealthy patrons for private collections. Large monasteries often had scriptoriums, a dedicated area for monks who specialized in manuscript production to work.

Because most manuscripts from this era were unsigned as an act of humility, it’s difficult for researchers to figure out who created them. Although not unheard of, it is rare to find illuminated religious texts attributed to women. Less than 1 percent of such manuscripts created before the 12th century have been credited to women. Because of this, modern researchers assume illumination was generally a man’s job. However, the tooth discovery suggests that nuns also played a prominent role in creating illuminated religious texts. And some, like the woman in Germany, were skilled enough to be trusted to work with a rare and expensive material like ultramarine.

An example of an illuminated manuscript created in Germany around 1220 AD. (Credit: Public Domain/Wikimedia Commons)

An example of an illuminated manuscript created in Germany around 1220 AD. (Credit: Public Domain/Wikimedia Commons)

Out of the Blue

The discovery begs an obvious question: how did paint get on her teeth in the first place? In the paper, the researchers outline a number of scenarios. She could have consumed the pigment for healing purposes. Many old world cultures thought lapis lazuli could treat scorpion bites, ulcers, eye growths, pustules and herniated membranes. But using lapis lazuli as medicine wasn’t widespread in Germany in the Middle Ages. Researchers say she could have inadvertently consumed the pigment while performing ritual osculation, a devotional practice that involves kissing religious figures in texts. But this worship practice wasn’t really popular until hundreds of years after her death.

A more probable explanation was that airborne lapis lazuli dust blew into her mouth while she was preparing pigment. Another likely scenario was that some paint entered her mouth while licking the ends of paint brushes, a technique that would create a finer point for detail work.

The researchers, who originally analyzed the woman’s dental tartar as part of a diet study, made the discovery by chance.

“It came as a complete surprise — as the calculus dissolved, it released hundreds of tiny blue particles,” said co-author Anita Radini of the University of York in a statement.

Researchers said the woman was middle-aged at the time of her death. Her remains didn’t point to particular pathologies, trauma or infections. An absence of occupational skeletal stress suggests her life was free of hard labor. She may have been educated and came from nobility, like most other women at monastic communities in Germany at this time.

Little else is known about what life might have been like for the woman and the 14 others who lived at the monastery before it was destroyed by a fire in the 14th century. However, researchers say their approach could help identify more women artists hidden in history.

“This woman’s story could have remained hidden forever … it makes me wonder how many other artists we might find in medieval cemeteries — if we only look,” Warinner said.