Blame Your Subpar Fitness on That Neanderthal DNA 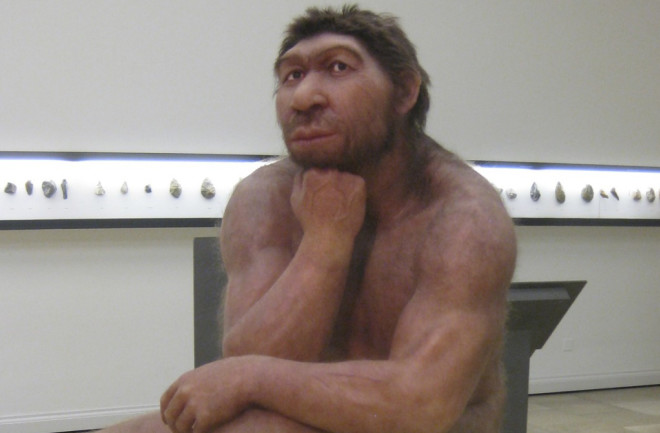 A Neaderthal strikes a pose at the State Museum of Prehistory in Halle, Germany. (Credit: Bridget Alex)

Most of us harbor about 2 percent Neanderthal DNA, inherited when our ancestors bred with Neanderthals more than 50,000 years ago. This was revealed back in 2010, when geneticists salvaged enough fragments of ancient DNA from Neanderthal bones to piece together a full genome. The discovery squelched a longstanding debate over whether Neanderthals and modern humans met — they did — and mated — oh yeah.

But why do we only have 2 percent Neanderthal ancestry? And what are the effects of that Neanderthal DNA on living humans? And why did our ancestors survive and Neanderthals go extinct? We’ve attributed our supremacy to bigger brains, better diets and advanced technology, but there may be a subtler, less flattering explanation for our evolutionary success.

Computational geneticists Kelley Harris of Stanford University and Rasmus Nielsen of the University of California, Berkeley propose a simple answer to all of these questions: Due to their smaller population size, Neanderthals were less evolutionary fit than modern humans, for the same reason that small, inbred groups today are less healthy. In small populations, mildly harmful mutations are more likely to persist and rise in frequency, while in larger populations they are weeded out by natural selection.

In a recent study published in Genetics, Harris and Nielsen use computer simulations to show that the average Neanderthal would have had at least 40 percent lower evolutionary fitness than the average modern human at the time they met. This means Neanderthals would have had fewer surviving offspring than modern humans when the groups were in the same place, at the same time — fewer offspring = lower evolutionary fitness.

The hybrid offspring of Neanderthal-modern human lovers would also have been less fit, and those small bits of Neanderthal DNA in present-day humans may reduce our fitness by 0.5 percent.

Archaeologists try to understand the differences between Neanderthals and modern humans by comparing their fossils and artifacts. Here archaeologists dig in Manot Cave, Israel, where modern humans likely stopped as they spread from Africa to Europe roughly 50,000 years ago. (Credit: Bridget Alex)

Archaeologists try to understand the differences between Neanderthals and modern humans by comparing their fossils and artifacts. Here archaeologists dig in Manot Cave, Israel, where modern humans likely stopped as they spread from Africa to Europe roughly 50,000 years ago. (Credit: Bridget Alex)

What makes the model of Harris and Nielsen so compelling is that it fits what we know from ancient and modern genomes. First, based on measures of genetic diversity, the population of Neanderthals was probably 1/10th the size of modern humans at the time of contact.

Neanderthal genetic diversity was lower than any living human group, including isolated groups like the Fuegians or Druze. In fact, it was among the lowest measured for any organism.

Finally, there is evidence that Neanderthal DNA has been mostly detrimental to modern humans and selected out of our genes. Although several Neanderthal mutations may have been beneficial — changes relating to hair, pigmentation and immunity — overall Neanderthal DNA is rare in our protein-coding genes

The blame-it-on-population size idea is theoretically and empirically supported, but rather anticlimactic for the narrative of modern humans. Our ancestors may have outcompeted Neanderthals, not through intellect or innovation, but through demographics — the mundane fact that we came from a larger, fitter stock.

Bridget Alex holds a PhD in Anthropology and Human Evolutionary Biology, and her research is focused on understanding how modern humans dispersed globally, as Neanderthals and other human types went extinct. She is a AAAS Mass Media Fellow, writing for Discover this summer.