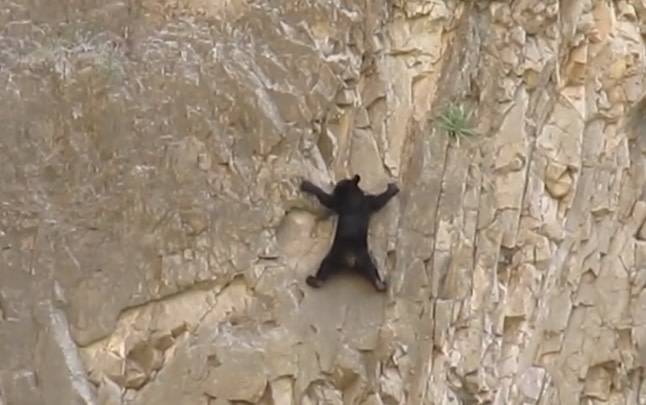 Black bears can snatch fish out of a raging river using their mouths, sprint 30 miles per hour and tear through meals with powerful jaws. Oh yeah, they can also climb sheer rock faces. You wouldn’t believe it unless you saw it, and thanks to a kayaker who was in the right place at the right time, you can certainly see that bears have some killer climbing skills. A female Mexican black bear and her cub were seen scaling a canyon wall near Big Bend National park along the U.S. border with Mexico.

Stephanie Latimer filmed the endangered Mexican black bears climbing on March 21, 2014, while kayaking in Santa Elena Canyon, and she shared the video on YouTube a few weeks later. Somehow, we failed to spot this video for more than a year (the video is making headlines again thanks to YouTube user Jeffrey Lewis, who reposted the same video Sunday). Regardless of the day it was filmed, this video is still impressive. The elder bear makes it up the cliff with relative ease, but the cub provides a bit of suspense as he negotiates the cliff. However, this clip isn’t much of a cliffhanger, as both bears make it safely to a more navigable ledge. After watching the video, you can’t help but wonder: What were they looking for? Perhaps momma bear caught the scent of a picnic basket.