Bite from the past: new study on boomslang venom provides insights into the death of renowned herpetologist Karl Schmidt 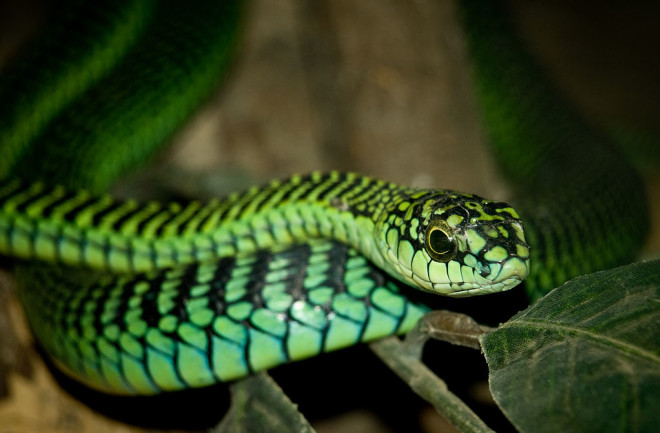 The deadly boomslang, the snake fingered in the death of Dr. Karl Schmidt. Photo by William Warby The actual bite happened in less than a second. Dr. Karl Schmidt, an American herpetologist at the Field Museum in Chicago, had been sent a live snake to identify by his colleague, Richard Marlin Perkins (then the director of the Lincoln Park Zoo). The animal appeared to be a boomslang (Dispholidus typhus), a kind of rear-fanged African snake, but there was something a bit odd about its scales, so Schmidt and his colleagues discussed the matter as they examined the serpent. It didn't take long for the agitated animal to decide it had had enough manhandling. "I took it from Dr. Inger without thinking of any precaution, and it promptly bit me on the fleshy lateral aspect of the first joint of the left thumb," Schmidt wrote in his diary on September 25th, 1957. "The mouth was widely opened and the bite was made with the rear fangs only, only the right fang entering to its full length of about 3 mm." A day later, he would be dead. Karl Schmidt, like most herpetologists and toxinologists at the time, didn't believe that boomslang venom was anything to worry about, in spite of peer-reviewed studies that raised alarms. So rather than seek medical attention, Schmidt took to his journal, documenting his symptoms over the next 24 hours. "4:30-5:30 strong nausea, but without vomiting, during trip to Homewood on suburban train," he wrote. "5:30-6:30 strong chill & shaking, followed by fever of 101.7°, which did not persist (blankets and heating pad). Bleeding of mucous membranes in the mouth began about 5:30, apparently mostly from gums. 8:30 PM ate 2 pieces milk toast." By morning, after a fitful night filled with bloody urine and violent nausea and vomiting, Schmidt decided he was feeling better, and even called the museum to say he'd be at work that day. He stopped taking notes on his condition. But sadly, he took a sudden turn for the worse after lunch. He struggled to breathe as his wife frantically called their physician and emergency aid. Then his breathing stopped. Resuscitation attempts failed. Just before 3 PM on September 26th, 1957, when Schmidt arrived at the hospital, he was pronounced dead. "Schmidt was a hugely respected biologist and herpetologist," said Nick Casewell, a senior lecturer and Wellcome Trust research fellow at the Alistair Reid Venom Research Unit at the Liverpool School of Tropical Medicine. So it's not surprising that over the decades, many have debated whether Schmidt could have lived. If he'd only sought medical attention immediately, rather than nearly a day after the bite when symptoms were dire. But would that have even saved him? Though it's hard to know for sure, in a new study, Casewell and his colleagues provide some answers. The researchers isolated and identified the components of boomslang venom and determined whether an antivenom similar to what would have been available to Schmidt at the time is capable of neutralizing the most devastating toxic components. Given that Schmidt described symptoms of impaired clotting throughout his ordeal, and his autopsy revealed extensive internal bleeding, it seems likely that he died from a condition physicians call consumptive coagulopathy. And not surprisingly, the scientists found deadly toxins in the venom that are also found other deadly snake venoms that kill by corrupting the blood. "Almost certainly, the toxic components responsible for the bleeding disturbances are the snake venom metalloproteinase toxins which completely dominate the venom proteome," explained Casewell. While their presence wasn't unexpected, the diversity of these toxins—nineteen different forms—and their overall contribution to the venom (more than 75% of the proteins in it) were a bit surprising. "Usually this kind of diversity and abundance is only found in certain vipers," Casewell explained.

Figure 1 from Pla et al. 2017, showing the abundance of snake venom metalloproteases (SVMPs) expressed in the venom gland of the boomslang. Schmidt severely underestimated the potency of the young snake he was sent, and the hours he spent at home rather than in medical care almost certainly ensured his fate. But if he had sought a hospital immediately, could he have survived? The researchers did find that CroFab™, a modern antivenom similar to what was available in the U.S. at the time, was able to bind much of the venom's potent toxins even though it is made using venoms from a completely different lineage of snakes. Still, Casewell isn't convinced. "It remains unclear whether this cross-reactivity would have translated into life-saving neutralization," he said. But the better question is whether doctors would have even thought to use that antivenom, since it wasn't made for snakebites from African snakes or rear-fanged ones. "Its also highly likely that Schmidt would have known that a rattlensnake antivenom was unlikely to be particularly effective against a bite by a completely distinct snake," he noted, and therefore, he may not have instructed doctors to administer antivenom even if he had been in their care early enough for it to have possibly helped. Today, the boomslang is considered one of Africa's most deadly snakes, and other rear-fanged species have become respected for their potent venoms. "Schmidt's death raised the attention of the potential toxicity of non-viper and elapid snakes to the scientific community, which resulted in a number of studies in the 60s and 70s," said Casewell. "Of course now, building on that early work, we know that colubrid snakes like the boomslang have a venom system homologous to those medically-important vipers and elapids and share a number of similar toxins, although the glands and fangs have some distinctions meaning that very few species are capable of killing people." While the nature of Schmidt's death has continued to draw fascination and speculation from venom community, his legacy extends far beyond the tale of his untimely end. As a herpetologist, he named more than 200 species and wrote more than 150 books. An avid reader, he built an impressive personal collection of scientific literature over his lifetime, and his library of over 15,000 titles lives on in the Karl P. Schmidt Memorial Herpetological Library at the Field Museum. He is a legend in the field, and continues to impact herpetology decades after his death. https://www.youtube.com/watch?v=jEyjF2bNQOA