Birds Travel Thousands of Miles to Save Energy 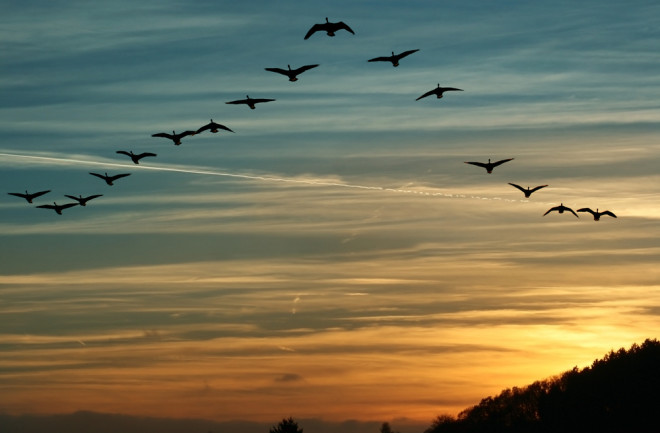 (Credit: zizar/Shutterstock) Should I stay, or should I go? It's a question we might imagine birds asking themselves every time the seasons change. Many, of course, do decide to leave, packing up for warmer or cooler climes, depending on the time of year. But many, the majority, in fact, don't migrate. The old adage might be true after all. If you stay there will be trouble — but if you go, it'll be double.

What then, is the deciding factor for the birds? Many species migrate to northerly breeding grounds in the summer, where resources can be more abundant for them and their young. When winter comes, the cold kills off the food and they return to warmer climes. But, as we've pointed out, many birds don't have to do this at all — they breed and feed in the same regions all year round. The choice, it turns out, comes down to energy efficiency. As new research in Nature Ecology and Evolution from scientists in the U.K. and France shows, birds migrate if doing so saves them energy in the long run. It sounds a bit odd — flying thousands of miles saves energy? But, given that competition for resources can be fierce in more populated areas, and that some birds can fly long distances more easily than others, it ultimately makes sense for some species to move and some to stay. To find out what goes into a species' decision to migrate, the researchers built a computer model of the world as it pertains to birds. They filled a virtual globe with the resources available to birds, and populated it with bird species, giving them the freedom to move around to make the best use of resources. In their simplified model, just three things mattered to the birds: How much energy it takes to migrate, how much it takes to keep warm, and how much it takes to reproduce.

It Takes All Types

After letting the model run, the researchers say that they were able to reproduce actual patterns of migration fairly well, something that reinforces the validity of their findings. The birds that migrated seemed to come from around the 50th degree of latitude — roughly the U.S.-Canadian border — and cluster in the tropics during the winter, rarely crossing the equator. It's a testament to the varied ways birds have evolved to deal with resource scarcity over time. Some adapt to their environments, while others simply choose to up and leave. It's also a reminder that birds have a pretty big advantage over most other species. While most have evolved to fit into their ecological niches, birds have another option — instead of adapting to their environment, they can simply find a new one. For migrating birds, who may not deal well with the cold, and may not be able to compete for resources in the tropics, they can split the difference. Though they may expend a great deal of energy traveling, it's less than what they would use to keep warm in the winter or fight for resources in warmer places. Because the researchers were using a vastly simplified model of the world, and of birds, we should exercise some caution. There may be factors the researchers didn't account for that influence whether birds migrate or not. But, the fact that they were able to reproduce the real world using such a simple model hints that they're likely on to something. Birds, it seems, have become masters of cost-benefit analysis.