Birds Sleep During Flights, Too

Scientists, for the first time, confirm that birds sleep midflight. 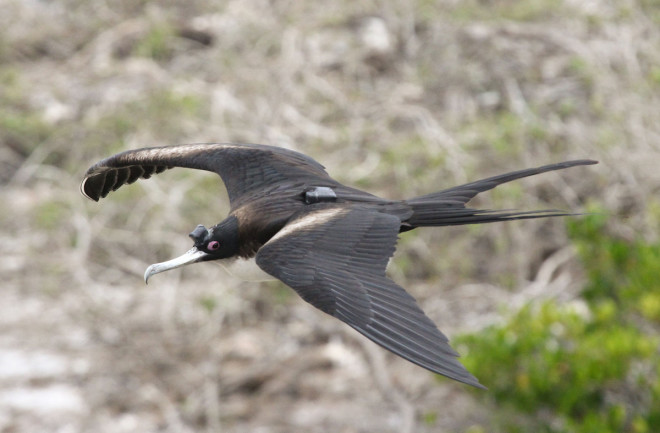 Scientists monitored the head movements and brain activity of flying frigatebirds, confirming for the first time that the birds could sleep midflight. | Reprinted by permission from Macmillan Publishers Ltd: Bryson Voirin/Nature Communications/10.1038/ncomms12468/3 August 2016

Sleepwalking can be a problem, but sleepflying? That’s a nifty adaptation, confirmed in August for the first time in birds.

The idea that birds snooze during multiday flights has been floating around for decades, but only recently could researchers prove it. Scientists built miniature devices to measure avian head movement, brain electrical activity and GPS location, and they attached them — almost like hats and backpacks — to great frigatebirds of the Galapagos Islands in Ecuador. The large birds then flew continuously over the Pacific Ocean for up to 10 days and 1,800 miles.

The results, published in Nature Communications, showed that frigatebirds could soar and glide with one or both sides of their brains asleep. What’s most surprising is not that the birds could sleep while flying, but how little they did: an average of 42 minutes a day in flight, compared with 12 hours a day on land, according to neuroscientist Niels Rattenborg of Germany’s Max Planck Institute for Ornithology.

“That’s a level of performance on little sleep that we can’t match,” says Rattenborg. Determining how frigatebirds function with so few Zs could help researchers better understand and combat sleep loss in humans.