Birds Don't Cry Over Defeat—They Groom One Another 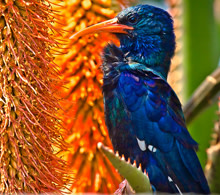 They cheer together. They lose together. They commiserate together. In that way, Andy Radford says, South African birds called green woodhoopoes are much like soccer fans in his native Britain. Radford, a University of Bristol professor, found that woodhoopoes live in gangs of about a dozen, and those groups don't get along terribly well—they often descend into shouting contests. Unlike human shouting matches, which usually just end up with everyone unhappier than they were before, the birds' contests have a definite winner. But, Radford says, the interesting part is what happens with the losers. The woodhoopoes preen each other more after a fight, he found, and much more after a loss. In addition, the most dominant birds in the group take more care of their underlings, perhaps trying to reassure them and make them stay in the group, as the outfit with the most members usually wins a fight. So maybe when people grab a beer together after a loss, it isn't just for drowning sorrows—it might help keep the group together.