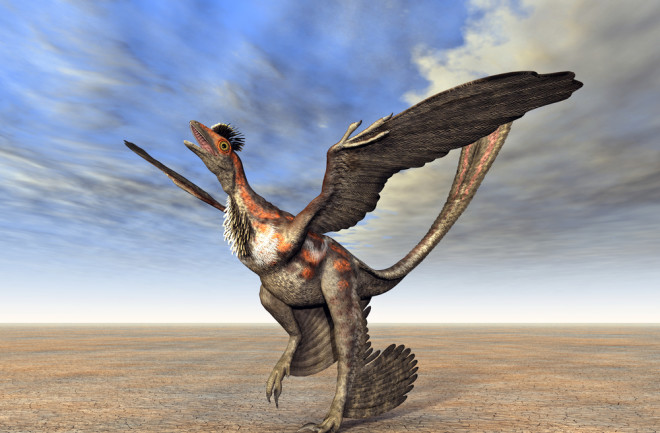 Microraptor illustration courtesy of Michael Rosskothen/Shutterstock You’ve got to give researchers a hand — or at least a forelimb — for discovering that a gradual transition in femur size and position was apparently the main factor behind changes in dinosaur evolution that, over millions of years, led to the emergence of birds. In a study published today in Nature, a team from the University of London’s Royal Veterinary College used computer modeling to challenge the widely-accepted theory that changes in tail length and weight were the primary factor in some dinosaurs’ developing a crouched posture that eventually made flight in their descendants (birds) possible. Researchers used three-dimensional reconstructions based on the skeletons of 17 archosaurs, all part of the ancestral bird line, including Microraptor and Archaeopteryx. Using detailed studies of the muscular anatomy of the dinosaurs, as well as data from CT scans of living relatives, the team fleshed out the computer models, estimating body shape and size. Modern birds are capable of flight in part because of their crouched posture. For years, paleontologists believed the birds’ closest ancestors, such as the deinonychosaurs, had evolved this crouched posture due to the shortening and lightening of their tails. The new computer models, however, reveal it was gradually enlarged arms that actually changed the animals’ center of mass and promoted less-upright posture.

Illustration from the Nature paper. This transition took millions of years: Archosaurs at the roots of the birds’ family tree, some 245 million years ago, resembled modern crocodiles, walking on four legs and having long, heavy tails. By 235 million years ago, however, their dinosaur descendants walked on only two legs. The Archosaur line that would eventually evolve into birds continued to develop enlarged forelimbs. At the same time, to maintain the animals’ changing center of mass over the feet to allow efficient terrestrial locomotion, the femur bone of the hindlimb was held in an increasingly horizontal position. Modern birds’ femurs are nearly horizontal. The team believes bigger arms may have evolved because they gave the animals an advantage in capturing prey or covering difficult terrain, though the larger limbs were also a crucial step in developing the ability for flight.