Bird Brains Hint At The Origins Of Our Sense Of Color 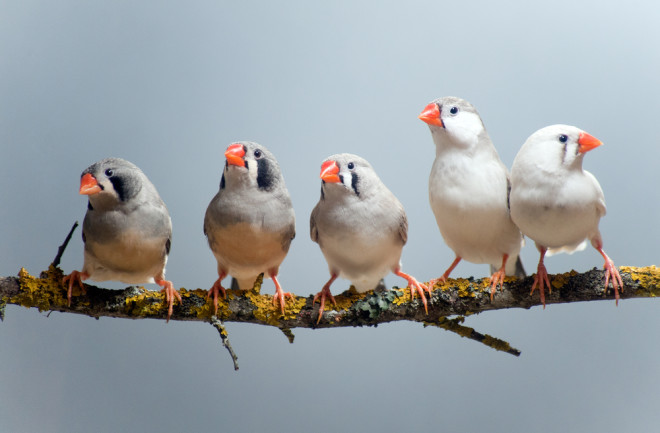 Zebra finches. (Credit: Natia Tsuleiskiri/Shutterstock) Is the blue I see the same as the blue you see? It's an age-old stoner question, and while it might not ever be possible to find a conclusive answer, it does touch on a fundamental mystery for linguists and neuroscientists alike. Where do colors come from? Not the physical colors themselves, of course - that's just different wavelengths of light. But where do the categories that we fit those perceptible wavelengths into come from? Most cultures possess words for colors, but the number of colors we divide the spectrum into varies wildly. Some languages possess words for only two or three, while in today's world of Sherwin-Williams color inflation we have thousands. What's the difference between vegan and frosted emerald anyway? At the heart of this propensity for color-naming, however, lies a neat little mental trick. To tell the difference between, say, blue and green, we must impose boundaries on a spectrum. Spectrums, by definitions, don't have boundaries, so it takes some imagination to do that. The result is that we've corralled a whole range of colors into broad groups and erected border walls between them. Though blue and green simply bleed into one another on the color spectrum, we've decided that, at a certain point, a color stops being blue and starts being green. It sounds mundane to us because we've been dealing with things like blue and green all our lives. But creating this arbitrary break point takes a level of abstract thinking that has been found precious few places in the animal kingdom. To do it, the thinking goes, a species would need a fairly highly-developed brain. So it might come as a surprise, or perhaps not, to hear that we can add birds to the list of color-categorizing animals.

Male zebra finches have brightly-colored beaks, but they're not all the same. They range along a spectrum from orange to red, and it's actually a bit of honest sexual signaling. More red means more astaxanthin, a compound that's associated with a healthy immune system. Accordingly, mates with ruby-hued beaks probably live longer. There's some debate about the extent to which beak color influences mating decisions among the birds, but researchers have confirmed that the birds can tell the colors apart. Now, researchers from Duke University suggest that the birds go a step further. Not only can they tell that the two colors are different — which is fairly mundane in the animal kingdom — they've shown that they split this range of colors into two meaningful categories. They have erected a dividing line in the electromagnetic spectrum, in other words, lumping everything on one side into the "orange" box and everything on the other in the "red" box. (The birds, though, obviously don't call these colors orange and red). To find this out, the researchers had the birds play a kind of game. First, they divided the spectrum between orange and red into eight even gradations. Then, they made disks using these colors — some were solid, while others were split between two different colors. The disks were set on a board with holes in it, and birdseed was placed only underneath the split disks. To find the food, the birds had to be able to see that the disk was bi-colored, meaning they could tell the colors apart. The researchers tried this with multiple combinations of shades — one and three, two and four, and so on — and this is what let them see how the birds grouped the colors into two categories. They published their findings Wednesday in Nature.

It turned out that the birds were much better at picking out split disks whose colors passed over the boundary between five and six than any other combinations. This told the researchers that they possess a kind of mental boundary line between those two shades, and it provides evidence, they say, that the birds group colors on either side of it into discrete categories. Though the difference in wavelength between colors one and two and between five and six is the same, the birds only attribute any significance to the latter. This may not sound so amazing to us, but it's the first time we've proven that any animal other than a primate can create arbitrary color categories. It's yet another addition to our understanding of avian cognition, which has been revised significantly upwards in recent years. Why the border between orange and red exists where it does for the finches is less clear, though the benefits of being able to pick out healthier mates is clear. We also don't know whether the birds can group any other colors into categories. The work could also hold implications for how we developed our own color categories. Linguists debate whether such groupings are innate, or whether they come from our cultures. There's evidence on both sides, and this latest research suggests that an evolutionary explanation might be at play here. Perhaps being able to tell blue from green, or mauve from purple helped our ancestors find the ripest fruit, or stay away from dangerous creatures. It also functions as a bit of a filter for us, Lund University's Almut Kelber says in an associated editorial. Trying to put every shade of orange and red into its own category would take too much cognitive power, so our brains simply divide colors into the categories that are most useful. Next up, he suggests, researchers should focus on finding what other animals possess the ability to create categories for colors.