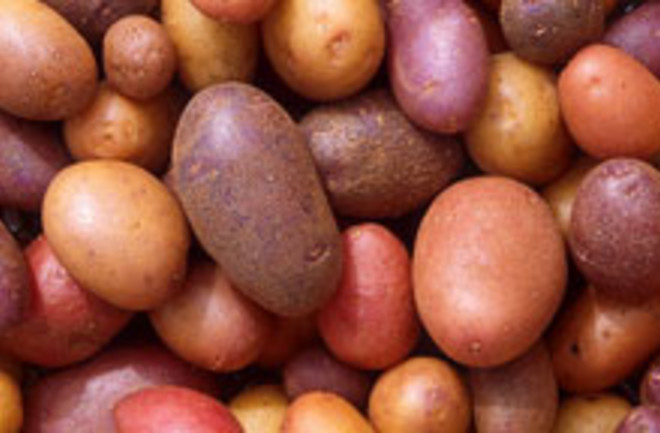 After 12 years of refusing to let any new genetically modified food crops take root in the European Union, the EU has finally given the go-ahead to an engineered potato. However, the GM potatoes won't end up in French pomme frites or German potato dumplings, as they've been approved only for industrial or animal feed purposes. Regulators say the high-starch spuds will likely be used by paper and textile companies. The Amflora potato was created by the German chemical company BASF and will be cultivated this year on a commercial scale of 250 hectares in the Czech Republic, Sweden, and Germany.

Before Amflora, only one other GMO had been approved for cultivation in the EU -- Monsanto's MON810 maize, in 1998 -- in spite of repeated findings from the European Food Safety Authority that such products did not pose health risks [Financial Times].

And even though that GM maize variety was officially approved by the EU, a number of European countries have banned its cultivation. The EU's decision to allow cultivation of the GM potatoes was met with considerable opposition.

Heike Moldenhauer, of Friends of the Earth, said the potato carried a controversial antibiotic resistant gene that could cause problems if it enters the food chain through feeding the industrial pulp from the potatoes to livestock [The Telegraph].

Unlike the United States, where GM crops are widely cultivated, many of the European Union's member countries remain staunchly opposed to their use, with critics particularly vocal in France, Austria, Hungary, Italy, and Greece. John Dalli, EU Health and Consumer Policy Commissioner, said the decision to allow the GM potatoes was based on "sound science." The approval, coming after a dozen years of official hostility to GM crops, may signal a larger shift in policy.

The decision also raises the possibility that other GM crops could soon win cultivation approval.... Along with the cultivation approval, the commission announced that it would proceed with plans to allow European countries to independently decide if GM crops can be grown in their borders [Greenwire].