To truly see bioluminescence, you must be there. But skilled photographers with the right gear can offer a glimpse: Alfia Rapicano used a six-second shutter speed to capture this moment at Jervis Bay in Australia. 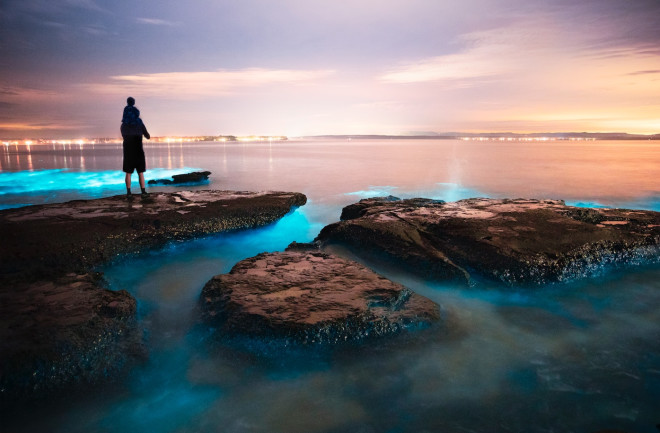 You’ve likely heard of sea creatures that glow underwater. What about the sea itself appearing to glow in the dark? This fantasy-like spectacle is commonly called bioluminescence. And you can observe the phenomenon in places around the world.

Technically, the water itself isn’t glowing, says marine biologist Michael Latz. The sparkle effect comes from a type of tiny algae known as dinoflagellates. These single-celled organisms, often invisible by day, emit light when disturbed by motion — like crashing waves, the swipe of your hand or a paddle gliding through the water. Exceptionally high concentrations are on display nearly year-round in rare areas known as bioluminescent bays, or simply bio bays. Dinoflagellates tend to concentrate in these shallower and semi-enclosed spots, preventing the organisms from getting flushed out into open water. Mangrove trees often flank the bodies of water, providing rich habitat for nutrients that sustain dinoflagellates.

Latz says bio bays are vulnerable to outside disturbance. Mosquito Bay in Vieques, Puerto Rico, for example, went dark for seven months following Hurricane Maria. Latz is now studying what helped the dinoflagellates reemerge in that habitat: “They are sensitive ecosystems. They’re vulnerable to the effects of our changing climate.”

Travelers can find several well-known bio bays glowing nearly year-round in the Caribbean: Luminous Lagoon in Jamaica, Bio Bay in the Cayman Islands, Salt River Bay in St. Croix, and three in Puerto Rico, including Mosquito Bay. Halong Bay in Vietnam is another notable spot, as well as Jervis Bay, known for spectacular but less-frequent bioluminescence. In some places, visitors can book nighttime eco-tours by kayak and carve a trail of light through the sea.

Science In Real Life We want to see your awe-inspiring photos. Tag #ScienceIRL and @Discover.Magazine on Instagram to share encounters with science in your cities, nature, the arts and beyond.