Any depth of understanding of biology and ecology is accompanied by this inevitable conclusion: parasites rule the world. They're the "man behind the curtain" as fans of Oz would put it. They are the directors and stage managers of the grand production that is life on this Earth, nature's finest puppeteers, and that we think we have any modicum of control over any species' physiology in comparison (including our own) is downright laughable. The latest reminder of our inadequacy when it comes to manipulating biology comes from a fresh paper in Proceedings of the Royal Society B. In it, scientists describe how the parasitoid wasp, Dinocampus coccinellae, is able to manipulate its host, the ladybug Coleomegilla maculata: it uses 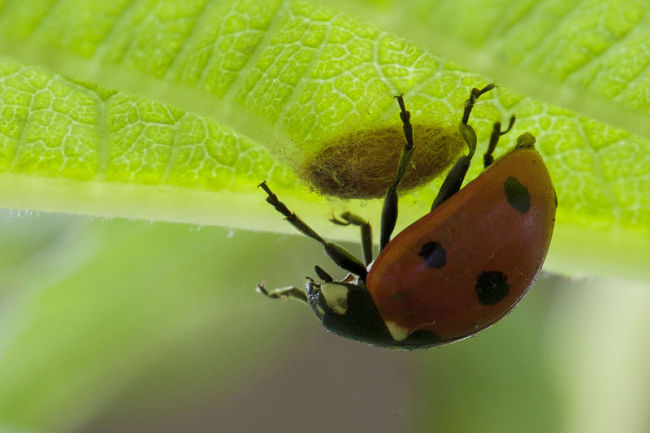 A ladybug defending the cocooned parasite that emerged from it. Photo by BeatWalker from Wikimedia Commons Parasitoid wasps are some of the most fascinating parasites on Earth. As adults, they are free-living little wasps that go about their day much like other Hymenopterans. But when it comes time to lay their eggs, they do not make nests of paper or mud; instead, they lay their eggs inside another creature. The larvae hatch in their host, and proceed to eat the host alive from the inside before erupting from the body, Aliens-style. Not surprisingly, most of the host species would not be particularly good sports about such invasive use of their organs, except that the wasps somehow take control of their hosts' brains. Some species make the host stay calm while they're led to their doom, while others turn their hosts into bodyguards, which will viciously defend the pupating wasp or wasps that literally just ate their way out of the animal's body. One such bodyguard relationship is found between the wasp Dinocampus coccinellae and its hosts, ladybugs (also called lady birds or lady beetles) like Coleomegilla maculata. The wasp uses its stinger/ovipositer (egg-laying structure) to lay its eggs inside the ladybug. The larvae develop inside the beetle, and after about 20 days, a single larva emerges, ready to pupate and transition into an adult wasp. It spins its cocoon between the ladybug's legs and starts the transformation. Here's where things get weird: rather than attacking the parasite that just stole from its body or leaving the pupating wasp to fend for itself, the ladybug stays with the cocoon, protecting it until the wasp hatches. Then, the ladybug returns to normal, and often can even go on to live a its regular beetle-y life, including feeding and reproducing like ludybugs do. Until now, scientists didn't know how the larva managed to control its host so long after leaving its body. But new findings suggest that a symbiotic RNA virus works with the wasp to take over the ladybugs' nervous system. French and Canadian scientists first discovered the presence of a previously-unknown RNA virus, which they named D. coccinellae Paralysis Virus or DcPV for short, in the brains of parasitized ladybugs. But to tie the virus to the parasitic wasp, they had to show that the virus is present in the parasite's ovaries, that it is transferred into the host when the eggs are laid, and that the virus is found in the neural tissue while the host's behavior is modified. Using a multifaceted approach combining RNA sequencing, quantitative PCR, and transmission electron microscopy, they were able to show that the virus is the main player when it comes to the bodyguard behavior of the parasitized bugs. The bodyguarding behavior is essentially a neurological disorder: the beetle is overcome with partial paralysis and tremors. Either it is partially paralyzed and simply lashes out in defense at anything that comes near, or it's neurons are set to trigger when they normally wouldn't, leading to thrashing behavior that is perceived as defensive. Either way, the team characterized the neural tissue in parasitized ladybugs and found that infection with DcPV caused swelling to axons and other trauma, and that infection with the virus — not wasp-derived venom compounds — is responsible for the bodyguarding behavior. "Our results suggest that changes in ladybeetle behaviour most likely result from DcPV replication in the cerebral ganglia rather than by a direct manipulation by the parasitic wasp" the authors explain in their conclusions. Their findings suggest that "DcPV is employed as a biological weapon by D. coccinellae to manipulate the behaviour of C. maculata." They also examined the ovaries of wasps and found neat little virus packages waiting to be transferred with the next batch of eggs. When they quantified the number of viruses in various tissues, they found that the eggs transfer a very low viral load, but then as the larvae hatch inside the bug, the viruses duplicate and spread. By the time the larva emerges from its host, the viruses are common in the brain and other neurological structures. Attempts to rid the virus by the host immune system increase the neural swelling associated with the bodyguarding behavior. Eventually, the host's immune system wins, and the viruses are cleared, which is why the ladybug can return to normal activity after infection (though as much as 75% of the time, the beetle dies, probably from the trauma of the larva feeding on its insides). 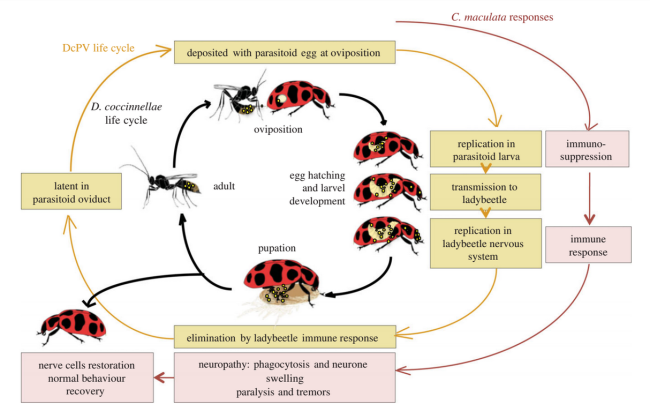 The complex life cycle of parasitic wasp, parasitic virus wielded by parasitic wasp, and the parasites' host ladybug. Figure 10 from Dheilly et al. 2015 This isn't the first study to connect parasitic manipulation to a virus, but in other species of wasps, the type of virus involved and what it does are very different. Other wasps use polydnaviruses to fight the hosts immune system during larval growth, but what, if any, role they play in behavior modification is not known. In many cases, the polydnaviruses appear to have become a part of the wasp, with their important proteins incorporated into the wasps' genomes, and thus the "viruses" no longer act like live viruses and instead rely on the wasp to create them. But Dinocampus coccinellae doesn't have any polydnavirus symbionts or polydnavirus proteins in its genome. Instead, it incubates DcPV: a fully functioning RNA virus, which is passed not only from the egg to the ladybug, but also from mother to egg and egg to larva that emerges, to eventually find its way to the wasp's ovary if it is female. There's more work to be done, of course, to really firm up the study's findings. The authors would like to see further study of the virus' effects on the ladybugs independent of the wasp through direct inoculation and knockdown experiments. There's still a lot to be explained, like how the timing of the wasp larva's emergence is so perfectly in tune with when the virus load overtakes the bug's neural pathways. And it remains to be seen whether the viral action is necessary for the parasitic wasp to survive — the authors suggest that studies should be conducted which test the fitness of wasps with and without their symbiotic virus to determine just how important the relationship is for the wasp — which may be of interest to scientists in Scotland, as the wasp is currently causing some big problems for their local native ladybug, the seven spot ladybird. Citation:

Dheilly NM et al. (2015). Who is the puppet master? Replication of a parasitic wasp-associated virus correlates with host behaviour manipulation, Proceedings of the Royal Society B, DOI: 10.1098/rspb.2014.2773