A billion-year-old fungi microfossil includes the earliest documented presence of chitin, a fibrous substance found today not only in fungi cell walls but also arthropod exoskeletons and fish scales. 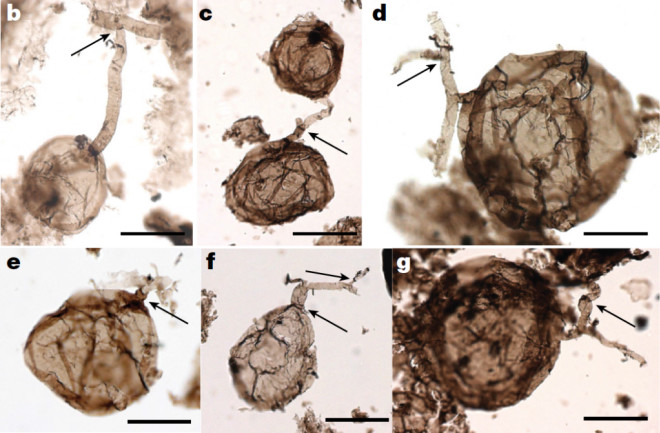 The fungus among us is a key player in the ecosystem — and was part of the world hundreds of millions of years before we were. Hold on, make that potentially a billion years before we came along. Fungi microfossils from the Canadian Arctic are 900 million-1 billion years old, pushing back the fossil record for these organisms by at least 450 million years. This discovery is about more than the very distant evolutionary kin of mushrooms, however.

The microfossils include the earliest documented presence of a fibrous substance called chitin, found in living fungi and animals as varied as insects and fish. The fossils change our story, too: Their age pushes back the broader timeline for the evolution of not just fungi, but also animals.

Because fungi are critical to healthy ecosystems, often breaking down organic matter and providing nutrients to other living things, researchers have long thought they were important to ancient environments as well. They may have even kickstarted the colonization of land by early multicellular organisms.

The fossils were collected a few years ago during field expeditions in Arctic Canada. The digs yielded an impressive haul of Precambrian life, including numerous single- and multicellular species new to science. They were found in shale deposits that, at the time the fungi were alive, belonged to a shallow river estuary ecosystem.

Classified as Ourasphaira giraldae, the ancient microfungi consist of branching filaments attached to bulbous structures. The largest of them is about a millimeter long. The team identified chitin in the microfossils' cell walls — the oldest such evidence of the fibrous substance. You can find plenty of chitin around today, from the cell walls of living fungi to insect and crustacean exoskeletons, squid beaks and fish scales.

Previously, researchers placed the origins of fungi at 740 million-1.06 billion years ago, based on molecular clock models. These models use the rate at which mutations accumulate to determine when lineages started growing their own branch on the Tree of Life. The age of O. giraldae, however, suggests fungi evolved much earlier. As a result, it also pushes back the start date, significantly, for organisms in the group Opisthokonta.

Not familiar with Opisthokonta? You should be. You're an opisthokont, and so am I. The group includes all fungus and animals, as well as an assortment of other eukaryotes, or organisms with cells that have a defined nucleus.

The study appears today in Nature and builds on previous work from the team published in February in Precambrian Research.